Buckingham Palace has released a statement informing the public that Queen Elizabeth's doctors are concerned for her health. Her Majesty's family has arrived at Balmoral to be with her. 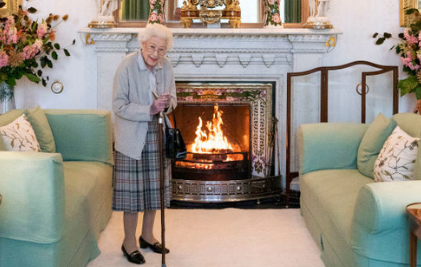 Queen Elizabeth II waits in the Drawing Room before receiving Liz Truss at Balmoral Castle for an audience where she will be invited to become Prime Minister and form a new government on September 6, 2022 Getty

Her Majesty Queen Elizabeth is under medical supervision, in Scotland, after doctors became concerned for her health, according to a statement from Buckingham Palace.

Today Buckingham Palace has released a statement informing the public that Queen Elizabeth is under medical supervision following advice from her doctors.

"Following further evaluation this morning, The Queen’s doctors are concerned for Her Majesty’s health and have recommended she remain under medical supervision. The Queen remains comfortable and at Balmoral," a Palace spokesperson said.

The Queen's close family has been informed and it's been reported that all her children along with Prince William have arrived at Balmoral to be with her.

A spokesman for Harry and Meghan, the Duke and Duchess of Sussex, who were in London to attend an awards ceremony this evening, has confirmed that the couple will be traveling to Scotland.

The Queen is under medical supervision at Balmoral after doctors became concerned for her health.

Buckingham Palace says family members have been informed about Her Majesty’s medical situation, and are now on their way to Scotland. pic.twitter.com/wVa6KU2fQg

BBC One has suspended regular programming after the announcement about the change to the Queen’s health. The broadcaster is airing a BBC News Special, Presenter Huw Edwards is wearing a dark suit, white shirt, and black tie, in accordance with the BBC’s dress code for when a member of the royal family dies.

In a social media post this afternoon, Prime Minister Lizz Truss said "the whole country will be deeply concerned with the news from Buckingham Palace".

"My thoughts - and the thoughts of people across our United Kingdom - are with Her Majesty The Queen and her family at this time," she wrote on Twitter.

The whole country will be deeply concerned by the news from Buckingham Palace this lunchtime.

My thoughts - and the thoughts of people across our United Kingdom - are with Her Majesty The Queen and her family at this time.

On Tuesday, September 6, the Queen met Prime Minister Truss for the "kissing of the hands" ceremony where her Majesty formally invited her to form a new government.

Holding the meeting at Balmoral, where the Queen is currently on vacation, rather than at Buckingham Palace was a break with tradition, but it was reported the decision was made with the Queen's health in mind due to her intermittent mobility issues.