Puck Fair returns to Killorglin, Co Kerry after a two-year hiatus on August 10, but some people are concerned about the welfare of the wild mountain goat at the center of the festivities amidst the Irish heatwave. 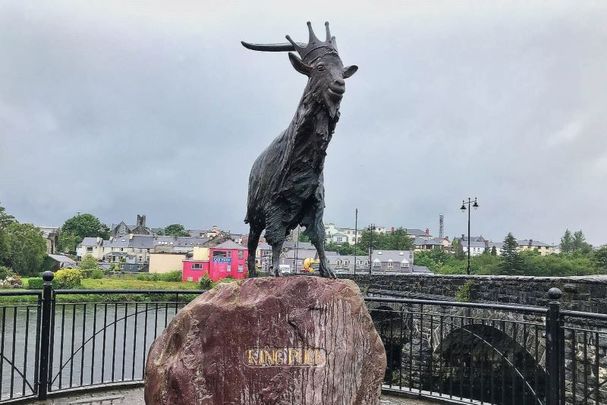 Puck Fair, a three-day Irish festival that dates back centuries, is set to return to Killorglin, Co Kerry on Wednesday, August 10, but this year, organizers are grappling with a countrywide heatwave.

On Wednesday, the first day of the three-day festival, a wild goat will be crowned “King Puck” and will be hoisted above Killorglin for two nights and three days, a fascinating tradition that is believed to date back to pagan Ireland.

The first sign of Puck 2022 - the Puck Fair Stand is up 😮 A fantastic team had an early start yesterday in the Square Killorglin to erect the Puck Stand. Even though the weather was bad there's nothing stopping the push for Puck Fair 2022. #PuckFair22 #PuckFair pic.twitter.com/v5mq5az25a

The festival is set to kick off the same that Met Éireann predicts a “hot spell” will develop and continue through the rest of the week. Daytime temperatures will widely reach the mid to high twenties, Met Éireann said, while the overnights will remain “uncomfortably warm.”

While there are typically concerns about King Puck's welfare, this year they are compounded by the heatwave, especially as the wild mountain goat will be held in a pen elevated some 50 feet in the air for two nights, as per tradition. Callers on RTÉ's Liveline on Tuesday described the practice this year as “inexcusable” and “mindboggling.”

However, Declan Falvey, chairperson of the Puck Fair committee, sought to assuage concerns, saying: “We will not allow the goat to be mistreated.”

Falvey said he and the organizers will “do everything in our power,” including “taking the goat down a level” and “putting a fan on board” if it’s necessary.

“We will make sure we look after the goat,” Falvey said.

What is Puck Fair?

Puck Fair, which was canceled in 2020 and 2021 due to the pandemic, is believed to have ancient origins, though there is no written record of when it actually began. Some written records from the 17th century suggest the Fair had already been in existence for some time.

There are multiple theories about the Fair's origins, with one suggesting that it is linked to pre-Christian celebrations of a fruitful harvest and that the male goat or “Puck” was a pagan symbol of fertility, like the pagan god Pan.

Whatever the origin, the tradition persists. Every year, a goat catcher goes up into the mountains to catch a wild goat, who is then brought back to the town of Killorglin in Co Kerry. In town, Queen of Puck, traditionally a young schoolgirl from one of the local primary schools, crowns the wild goat as King Puck, signifying that the festivities may begin. On the third day, King Puck returns to his home in the mountains.

King Puck will be "coronated" this year on August 10 at 6 pm and "dethroned" on August 12 at 6 pm. In the meantime, he will remain in a pen on a high stand in the center of town as festivities take place. During the three day fair, which is always held on August 10 - 12, pubs in Killorglin can stay open an hour later, until 3 am.

Falvey said on Liveline on Tuesday that King Puck will be "unfettered" while he's in the “more than adequate” pen.

“We do our utmost to respect the feelings of the goat,” he said, pointing to the Fair’s animal welfare policy.

Falvey said this year's King Puck, which he described as a "fine specimen," was retrieved about a month ago and was given time to acclimate. The wild mountain goat is four years old and has a “very calm temperament.”