The ancient history behind Ireland's Puck Fair, a fun family festival with oodles of entertainment that has its roots in Ireland's pagan past. 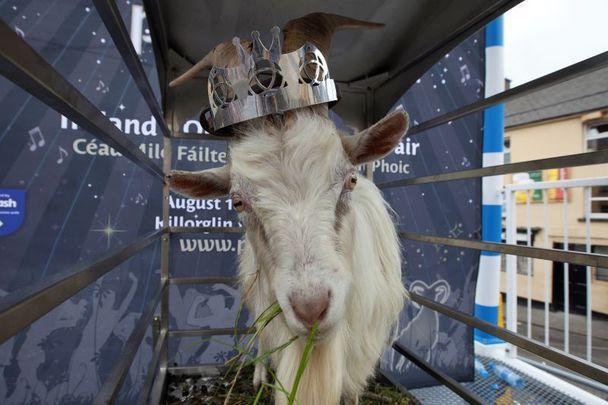 August 11, 2015: King Puck chews on some food after spending his first night perched high over Killorglin in Co Kerry. RollingNews.ie

Puck Fair in Killorglin, Co Kerry is a firm favorite with those on vacation and Irish locals alike, but many may not know its intriguing history dating back to the 4th century.

As part of Puck Fair, Ireland’s oldest festival, a wild mountain goat is crowned and worshipped as "King Puck" for the two-day festival, a strange tradition that has its roots in 4th-century pagan Ireland.

Jerry Mulvihill, author of the book “The Puck Fair – Ireland's Oldest Celebration,” wrote that in pagan times, the wild goat would have been sacrificed. Now the goat is treated like a prince, the center of attention for the three days.

The festival, which runs ordinarily in August and usually attracts over 80,000 visitors, was said to be linked to the Celtic festival of Lughnasa, which symbolizes the beginning of harvest. The goat was a symbol of pagan fertility. 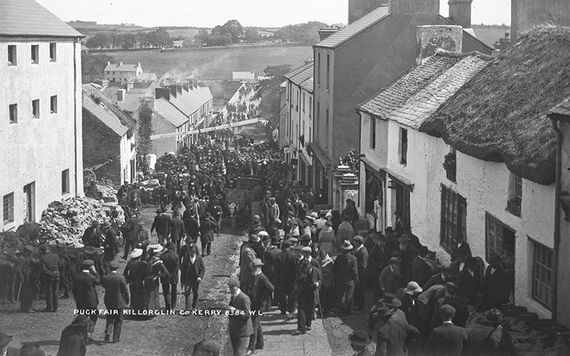 Crowds at Puck Fair, in Killorglin, in the early 1900s. (National Archives of Ireland)

Every year, locals capture a wild goat in the Macgillycuddy Reeks, Ireland's highest mountain ranges located close by, and bring it back to town. Mulvihill writes that one of the best-known goat catchers was Michael 'Butty' Sugrue, once known as Ireland's strongest man.

The “Queen of Puck,” usually a local schoolgirl, crowns the goat “King Puck.” The goat is placed in a small cage on a high stand for three days as the locals celebrate with markets, entertainment, and pubs that stay open until 3 am. At the end of the fair, the goat is released back into the wild. 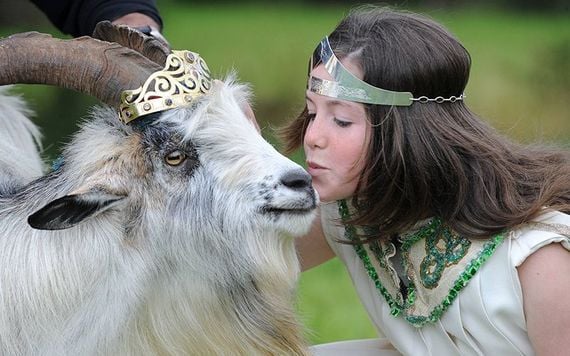 The young Queen of Puck with King Puck. (Via: Failte Ireland).

Author of “The Puck Fair - Ireland’s Oldest Celebration” Mulvihill, grew up just four miles from Killorglin and has only missed one Puck Fair when he was traveling in Australia. He said locals would rather visit Killorglin for Puck Fair than Christmas. 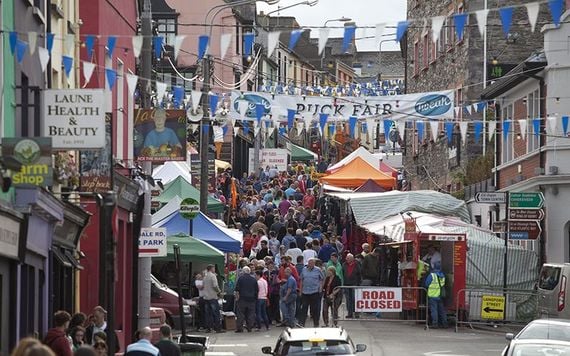 Crowds on a closed down Killorglin village during Puck Fair.

In 2016, Mulvihill told the Irish Independent, "If you're from Kerry, and especially near Killorglin, it's a very exciting time and a real reunion.” 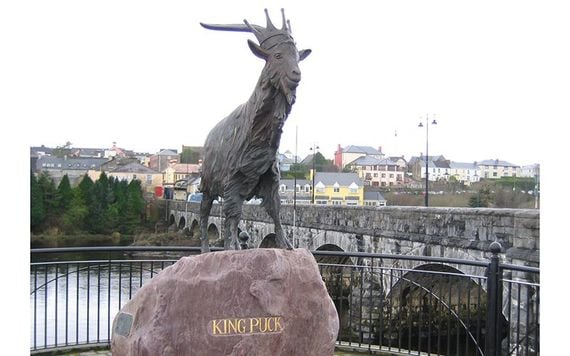 A statue of King Puck in Killorglin, Kerry.

The second day is Fair Day, the heart of the festival. This sees various types of vendors descend on the town with anything from animals to jewelry for sale. There is also live music and talent contests, a Bonny Baby competition, storytelling, and all sorts of other entertainment.

The third day, Scattering Day, sees the King relieved of his duties and returned to the wild after he’s paraded through the town again. Celebrations then continue late into the night.

Here’s a short video on Puck Fair made for The Gathering 2013: