For the second year, the Irish Consulate in New York City will welcome everyone and anyone to join in their official Pride Parade delegation. 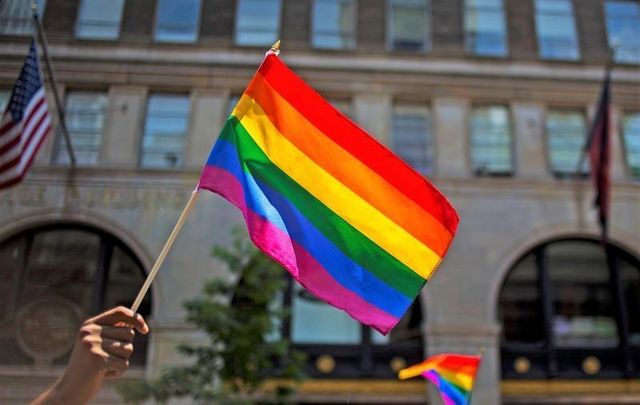 The Irish Consulate welcomes everyone to join in their NYC Pride Parade official delegation. Getty Images

The Irish Consulate in New York City will be marching in this weekend's Pride parade; all are welcome to join.

The Irish Consulate has announced that it will again have an official delegation marching in this year’s New York City’s Pride parade on Sunday, June 30 and all are welcome to join.

The Irish Consulate is marching in conjunction with the Lavender and Green Alliance under the leadership of Ireland's  Minister for Children and Youth Affairs Dr. Katherine Zappone.

Minister Zappone said: "It is 50-years since members of the LGBTI+ community asserted their rights on the streets of New York with the Stonewall riots. This month on those same streets Ireland’s leadership will be acknowledged. At World Pride, we will be honored as a nation with a luminary award. We are now a leading voice, and a recognized global leader for LGBTI+ rights."

Renowned Irish DJ Fiona Walsh will also be on the Irish Consulate's float providing music throughout the march.

Last year, IrishCentral was on hand to provide a live feed from the day’s events:

25 years to the day that homosexuality was decriminalized in Ireland, the Global Irish are celebrating NYC Pride

A press release from the Irish Consulate read: “Building on our success from last year, we have registered to have 400 marchers, in addition to our float.”

“We would very much like our participation to be representative of the Irish and Irish-American community as a whole, and we are asking your organization to be a part of it, marching in support of all members of the Global Irish community.”

“We need your help to make this happen by nominating group leaders and marchers! All are welcome to join what will be another very special and fun day out. We hope that we’ll have room for all who want to march with us within our 400 but, as we’d like as many organizations as possible to be part of the day, we may have to put a cap on numbers from each organization, depending on demand.”

Leaders are needed for every 50 marchers in the delegation to help the route move smoothly. Those wishing to volunteer as a leader will need to attend an evening of training on June 4 at 7 pm on Christopher Street in NYC.

Registration to join the Irish Consulate’s delegation is available online through Eventbrite, but if you are looking to register a group, please email worldpride2019@dfa.ie with a list of your marchers and a point of contact by June 14th.

The Irish Consulate’s delegation plans to gather at the Churchill Tavern on 28th Street between 10:30 and 12:30 ahead of the start of the parade. Check-in time as 1 pm at 30th Street between 5th Ave and Madison Ave and the route will culminate at 23rd Street and 7th Avenue.

The Irish Consulate added: "We welcome LGBT+ and allies alike, and anyone with an interest in or affiliation with Ireland!"

The Irish Consulate's delegation at the 2018 NYC Pride Parade

As part of this month's Pride event in New York City, the Irish Arts Center in Long Island City on Saturday, June 29 will screen the film ‘The 34th,’ which documents the driven and dedicated group of people who formed the grassroots force behind the extension of civil marriage to same-sex couples in Ireland. More details and tickets are available online.

Will you be joining in on a Pride parade this year? Let us know in the comments!