Archaeologists now believe there's conclusive evidence that the structure is a megalithic dolmen. 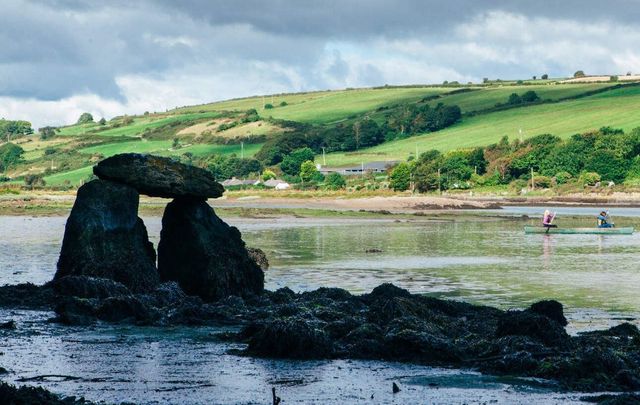 A mysterious structure found in Cork Harbour many years ago is a prehistoric tomb, new research has found.

Archaeologists had been divided about whether Carraig á Mhaistin on the eastern side of Cork Harbour was a prehistoric tomb or a 19th-century "folly", but Connemara-based archaeologist Michael Gibbons now says there is conclusive evidence that the structure is a megalithic dolmen.

Gibbons has also found a previously undiscovered cairn close to the dolmen and is reporting the discovery to the National Monuments Service.

Gibbons told the Irish Examiner that the Carraig á Mhaistin structure was not included in the Irish State's survey of megalithic tombs over 40 years ago because there were doubts about whether it was a real prehistoric tomb.

"At that time, it was suggested that it could have a folly or type of ornamental structure commissioned by local gentry at the nearby Rostellan Castle estate, and dating from the 19th century," Gibbons said.

“The Carraig á Mhaistin stone, a monument thought to be an 18th or 19th century folly has now been identified as an ancient megalithic dolmen.”

In a report written on the monument, Gibbons notes that the structure is "partially entombed in estuarine mud", adding that a great deal of the structure is probably concealed beneath the surface.

Gibbons also discovered that the tomb's small chamber is located at the western end of the cairn, which is 25m long and 4.5m wide. He said portal tombs sometimes have intact cairns which provide both structural support and "enhance the visual presence" of the landscape.

He said it is not clear when the area became inundated by rising sea levels but said this part of Cork Harbour has been stable for roughly 2,000 years.

Gibbons said it is one of only two known inner-tidal portal tombs in Ireland. The other tomb, which is known as "the Lag", is located on the River Ilen between Skibbereen and Baltimore in West Cork.

Gibbons said the two tombs may have been part of a network of tombs built close to Ireland's west coast which did not survive the "high energy environment" of the Atlantic Ocean.