What motivates a young Irish American to run for office in the age of Trump?

The Irish are back in the Bronx —John Doyle wants to make a difference. 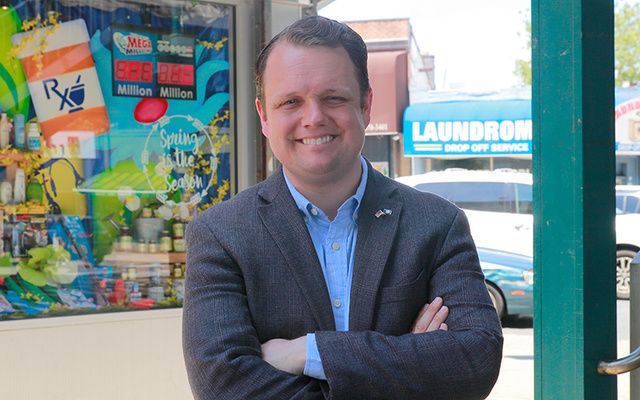 Once upon a time the Bronx political machine was all Irish, run by the masterful Ed Flynn who many compared to the legendary Chicago boss Richard Daley.

A lot has changed since and the Irish have mostly fled the Bronx and the machine is run by Hispanic and black leaders, though nowhere as effectively as in Flynn’s day.

Now comes a throwback, an Irish American running in the Bronx, the first in decades.

John Doyle is a 32-year-old candidate for New York City Council 13th District in the Bronx. I went up to his prospective district to meet him and find out a little bit about what motivates a young Irish American to run for municipal office.

His main opponent is Assemblyman Marc Gjonaj, ready to give up his assembly seat for a better paying city council job. Doyle has been scathing about Ggjonaj’s decision, saying his assembly seat should be his priority.

The city council seat is up for grabs. On my third ever visit to the Bronx, he carefully explains to me, “This district is kind of where the city meets the suburbs.” The district itself stretches from City Island to Pelham Bay, taking in middle class areas, poor areas and is overwhelmingly Democratic in one of the bluest cities in the nation: in 2013 the incumbent polled over 13,000 votes against some 2,000 for the GOP candidate, meaning the real electoral test here is for the Democratic nomination.

His background, he tells me, is solidly Bronx Irish; his paternal grandmother was Irish born and her husband “descended from Laois.” His mother’s parents were born and raised, like Doyle himself, in the Bronx.

John Doyle on the campaign trail.

“My grandmother came to this country and she was a cafeteria lady,” he tells me. “She saw my father go to college. She’s not around today, but today her grandson is fighting to make sure that all kids get a free lunch in the public school system. That’s the story, that’s us all climbing the ladder.”

The district is hardly Woodlawn—you’re not tripping over people from Kerry or Cork—but it’s certainly a hub for immigrants in that typically New York way.

Some of those immigrants even happen to be undocumented, too.

“As far as I’m concerned they are New Yorkers,” Doyle tells me when I raise the city’s sanctuary policy. “I’m the grandson of immigrants. I can’t turn my back on their story, their history because their names are different and they might look a little different. The American story is the same as the immigrant story.”

Happy to stand with and provide water to @1199SEIU today in #Allerton as nurses & assistants are fighting for their jobs + a fair contract. pic.twitter.com/3zw5XRyqHm

Immigrant or not, the thing that Doyle thinks most Bronxites want him to concentrate on is transport into the area.

“Our area was passed over for the city’s ferry service,” he says. “They say about me I can be persistent and I can be a pest. I’ll be both when it comes to the ferry service.”

“There’s a world outside of the shores of Manhattan,” he adds, “and if elected I look forward to bringing that perspective down there.”

He thinks Mayor de Blasio’s performance so far has been a “mixed bag”—City Hall’s zoning proposal apparently went down like a “lead balloon” in the district—but he welcomes the mayor’s efforts to roll out UPK.

Crime is another issue that affects the district: “The opioid epidemic is serious.”

And like in so much of New York City, homelessness is clear for all to see.

Despite the roller coaster weather we’ve been having lately, I want to give a shout out to my amazing volunteer team. They’ve been great! pic.twitter.com/xkh91KsTqR

“There’s 60,000 homeless in New York right now. And a lot of people would rather live in the streets because the shelter system is so dangerous.”

One solution he thinks could be the state legislature's plans to subsidize people at risk of losing their homes “rather than put them through the shelter system, which is unsafe.”

But all his ideas will count for nought unless he can win his party’s nomination and then the election in November and with polling day looming he’ll be taking the whole summer off to knock on doors in the sweltering New York heat.

And if his neighbors propel him onto the City Council he’ll join the once all-powerful Irish caucus. Currently with only four members, it’s not quite the dominant force it was, but who knows what more it could do if there were five of them?