Following Arlene Foster's resignation, unionists Jeffrey Donaldson and Edwin Poots have come forward hoping to fill her role as head of the DUP. 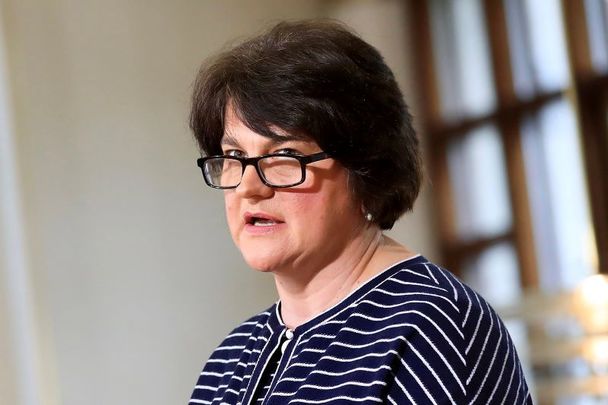 Arlene Foster, pictured here in Dublin in July 2020, announced her resignation as DUP leader and First Minister on April 28. RollingNews.ie

The first-ever contest for leadership of the Democratic Unionist Party (DUP) in the 50 years since it was founded by Ian Paisley will follow Arlene Foster’s sudden ousting last week.

Although there are two contenders, so far, for the party leadership, there’s no guarantee either candidate will also be given the post of First Minister of Northern Ireland which Foster also held.

That’s because if Sir Jeffrey Donaldson, 58, who announced his intention to run for the party leadership on May 3, maintains his MP seat at Westminster will not allow him to take up the First Minister task at Stormont.

Today, on this centenary day for Northern Ireland I am delighted to announce that I am putting my name forward for the leadership of the ⁦@duponline⁩ I would count it a great honour to serve my party & country in this role. #strong #united #focused pic.twitter.com/yXhfipbXPS

And his rival Edwin Poots, 54, who played a significant role in ousting Foster, is intent only on leading the DUP.  He does not want to be First Minister.  A spokesman told the Sunday Life that Poots would appoint a Northern Ireland Assembly colleague to the First Minister role while he concentrates on the DUP leadership.

Today, I announce my candidacy for leader of the Democratic Unionist Party. I love this country and its people and I look forward to engaging with party colleagues in the days ahead. pic.twitter.com/Qesd3GTCwR

Poots, who believes the earth is only 6,025 years old, is a hard-liner. As Northern Ireland’s agriculture minister, he had a personally difficult role. He oversaw the department with legal responsibility to manage the border checks. At the same time, he actively worked against the international agreement that introduced those same checks.

Along with most of the DUP, Poots is anti-Northern Ireland Protocol in that international agreement which places a goods border down the Irish Sea.

By comparison, Donaldson is seen as a moderate by the standards of the DUP. He is a former Ulster Unionist, but he led a walkout of the 1998 peace talks after opposing the early release of republican and loyalist prisoners. He joined the DUP in 2004.

Donaldson said he would promote a positive strategy and values if elected as DUP leader, with a focus on building a shared future for everyone in Northern Ireland.

He also pledged meaningful reform within the DUP and said he would set clear policy directions on key challenges for unionism, such as the contentious Northern Ireland Protocol.

Donaldson announced his leadership bid on Monday, the date viewed by many historians as the centenary of the creation of Northern Ireland.

“We want to build a shared future for Northern Ireland where everyone, regardless of their background, has a part to play in showing the world what we are truly capable of.”

Last week, Foster announced she would resign as party leader on May 28 and as Northern Ireland's First Minister at the end of June after an internal revolt against her leadership.

The move came in the form of a letter of no confidence signed by a majority of the party’s senior elected representatives.

Discontent at the DUP’s Brexit strategy was a major factor in the move against Foster, with party rank-and-file laying some of the blame for the emergence of an Irish Sea border, in the form of the Protocol, at her door.

Traditionalists from the party’s religious fundamentalist wing also harbored concerns over positions Foster took on some social issues, in particular her decision to abstain in a recent Assembly vote on a proposed ban on gay conversion therapy – a proposal the majority of her party colleagues opposed.

Now a total of 35, eight Westminster MPs and 27 Assembly members, will vote for the new leader.