Unionism is battling desperately for survival in Northern Ireland. 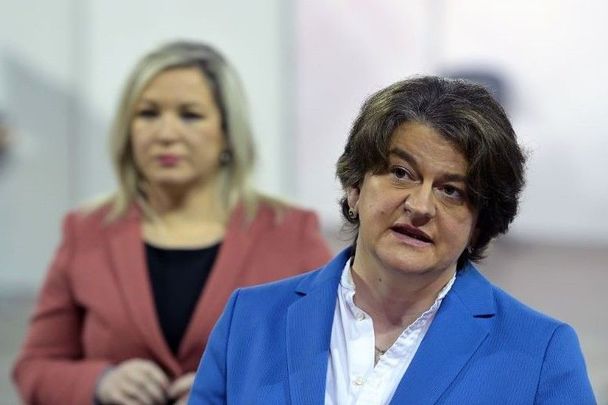 BBC Northern Ireland political correspondent Gareth Gordon reckoned the reasons for the demise of the two leaders are woven with the same thread.

He said their announced departures were caused by shifting demographics, uncertainty caused by Brexit, and a growing number of unionists who don’t see the two parties as sure-footed custodians of the union with Britain.

Outgoing Ulster Unionist leader Aiken, 58, said on Monday the party is “not breaking through” and that a change of leadership is needed. The party had “not been working as well as it should be.”

Aiken, a former submarine commander, has been the UUP leader for only 18 months. He is the fifth leader of the UUP’s declining fortunes to stand down since David Trimble in 2005.

Aiken will remain in charge temporarily until his successor is found. A virtual meeting of the party's ruling executive was held on Tuesday night to discuss the leadership process.

Favorite to take over is former decorated British Army veteran Doug Beattie, 55. He is seen as progressive on social issues such as same-sex marriage and abortion reform.

Alex Kane, a commentator and former director of communications for the UUP, said the party “really doesn’t have anyone else” to take over at a time when unionist leadership is in disarray.

Kane said that while the DUP is also scrambling to appoint a successor to Foster, Beattie would have “no choice” but to open up a new fight for unionism that is neither evangelical nor socially conservative.

He said, “The leadership of the UUP matters only if it presents a choice. The UUP say they are not the same as the DUP, but most people think they end up doing the exact same thing, nudging in behind them, even eventually on issues like Brexit and the Northern Ireland Protocol.

“It just confuses people, and ‘soft’ unionists go to the Alliance Party.”

The UUP currently has 10 elected members of the Northern Ireland Assembly, including former leader Robin Swann who is now minister for health.

The DUP has Edwin Poots, a hardline conservative who believes the world is only 6,000 years old, and Westminster MP Sir Jeffrey Donaldson, competing to succeed Foster. Meanwhile, their party has banned its members from speaking publicly about the race.