Trump says he will not attend Biden’s inauguration

President Donald Trump said in a tweet that he "will not be going to the Inauguration on January 20th." 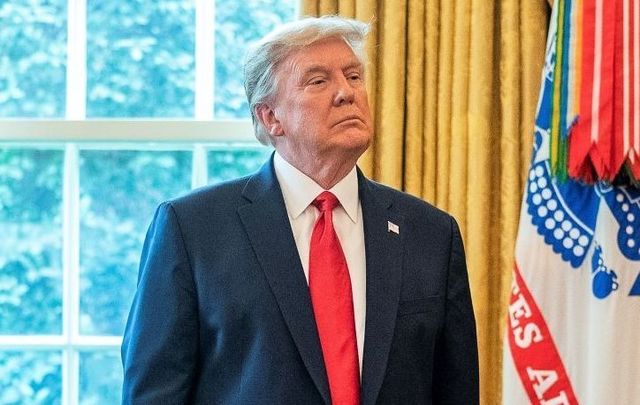 January 4, 2021: President Trump listens as Rep. Devin Nunes addresses his remarks prior to presenting the Medal of Freedom to Nunes in the Oval Office of the White House. Public Domain / White House Flickr, Shealah Craighead

President Donald Trump, two after the riots at the US Capitol, confirmed on Twitter that he will not be attending US President-elect Joe Biden’s inauguration on January 20.

Just before 11 am EST on Friday, Trump said in a tweet that he "will not be going to the Inauguration on January 20th."

To all of those who have asked, I will not be going to the Inauguration on January 20th.

Following John Adams in 1801, John Quincy Adams in 1829, and Andrew Johnson in 1869, Donald Trump now becomes only the fourth president in US history to not attend his successor's inauguration.

At the 'Save America Rally' in Washington, DC on Wednesday, shortly before pro-Trump rioters stormed the US Capitol, Trump continued to falsely claim that the recent US Presidential election was "rigged, "stolen," and "fraudulent."

Earlier on Friday,  about an hour before he said that the will not be attending Biden's inauguration, Trump said on Twitter:

The 75,000,000 great American Patriots who voted for me, AMERICA FIRST, and MAKE AMERICA GREAT AGAIN, will have a GIANT VOICE long into the future. They will not be disrespected or treated unfairly in any way, shape or form!!!

Trump was locked out of his Twitter account on Wednesday evening, the day pro-Trump rioters stormed the US Capitol, after breaching the platform's "Civic Integrity policy."

Trump's first tweet after regaining access to his Twitter account on Thursday was a recorded video in which he said in part: “Now Congress has certified the results. A new administration will be inaugurated on January 20. My focus now turns to ensuring a smooth, orderly, and seamless transition of power.”

Closing his brief remarks, Trump said: “To all of my wonderful supporters, I know you are disappointed, but I also want you to know that our incredible journey is only just beginning.”

On January 7, the day after the riots at the US Capitol, US Senators Roy Blunt (R-MO), Chairman of the Joint Congressional Committee on Inaugural Ceremonies (JCCIC), and Amy Klobuchar (D-MN), Ranking Member of the US Senate Committee on Rules and Administration, issued a statement regarding the upcoming inauguration: “Since 1901, the Joint Committee has been entrusted to plan and host the inaugural ceremonies every four years to mark the transition to a new presidential administration or the commencement of a new presidential term—thus fulfilling the 20th Amendment of the Constitution.

“Yesterday was a sad and solemn day for our country. The outrageous attack on the Capitol, however, will not stop us from affirming to Americans—and the world—that our democracy endures. Our committee’s bipartisan, bicameral membership remains committed to working with our many partners to execute ceremonies that are safe and showcase our determined democracy.

On January 5, the day before the riots at the US Capitol, the Presidential Inaugural Committee (PIC) shared details about the upcoming Biden-Harris swearing-in ceremony, which will include a Pass in Review on the East Front of the Capitol, a Presidential Escort to the White House, and a virtual parade across America.

In December, the PIC advised members of the public to stay at home on inauguration day in light of the pandemic. The PIC is consulting with Dr. Kessler who "will continue advising the PIC on how best to hold inaugural events that prioritize health and safety."

A nod to President-elect Joe Biden's Irish roots, it was previously announced that Irish music group The Chieftains and Irish violinist Patricia Treacy had been invited to perform at the inauguration ceremonies.