Around 300 Donald Trump supporters who stormed the Capitol on January 6 are now facing charges. 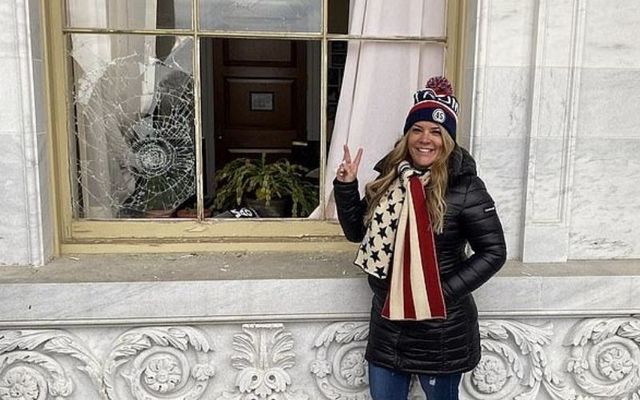 A Texas woman who flew to Washington on a private plane to take part in the Capitol riots is begging President Donald Trump for a presidential pardon.

Jennifer Ryan, a 50-year-old real estate broker from Frisco, Texas, was charged with knowingly entering or remaining in a restricted building without lawful authority and disorderly conduct on Capitol grounds after turning herself in to authorities on Friday, January 15.

Ryan was released shortly after Friday's arrest and is now appealing for a pardon before Trump leaves office on Wednesday.

"I would like a pardon from the President of the United States. I think that we all deserve a pardon. I’m facing a prison sentence. I think that I do not deserve that," Ryan told CBS11.

"From what I understand everyone is going to be arrested that was there, so I think everyone deserves a pardon. I would ask the President of the United States to give me a pardon."

She said that the Trump supporters who marched on the Capitol were simply following the President's orders and that she feels no guilt or shame over her involvement in the riots.

"He asked us to fly there, he asked us to be there. So I was doing what he asked us to do. So as far as in my heart of hearts, do I feel like a criminal? No. I am not the villain a lot of people make me out to be or think I am because I’m a Trump supporter."

Ryan flew to Washington DC on a private plane on Tuesday, January 5, the day before the Capitol riots.

She shared several posts on social media from the riots, including a video from outside the Capitol Building where she told her followers that Trump supporters were "going to break those windows."

Ryan also shared a 21-minute live-stream video of her and several other Trump supporters marching towards the Capitol and said "we're going to go down and storm the Capitol", according to an FBI complaint.

The FBI complaint also states that Ryan told followers that she was going to enter the Capitol Building as she approached the west side of the building.

"Life or death, it doesn't matter. Here we go," the FBI complaint said.

The complaint noted that she then turned the camera and exposed her face, telling people to hire her as their realtor.

Ryan later tweeted that she had stormed the Capitol and that it was one of the best days of her life but now fears that her career has been ruined.

We just stormed the Capital. It was one of the best days of my life.

The Texas Real Estate Commission has received several complaints since the Capitol riots calling for Ryan's license to be revoked.

Ryan later tweeted that she was "truly heartbroken" over the five deaths that occurred during the riots, stating that she believed she would be taking part in a peaceful protest.

She also revealed that she lost a publishing deal for a self-help book due to her involvement in the protests.

However, she said that she has no regrets and also claimed that she would do it again.

The FBI has opened roughly 300 cases against Trump supporters who stormed the Capitol on January 6 and searched Ryan's home shortly after her arrest last Friday.