The White House announced that today would be the Irish-American chief strategist's final day in the role. 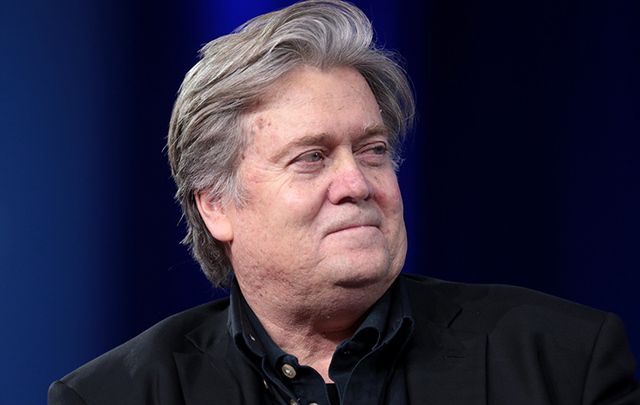 Steve Bannon will serve his last day as Trump's chief strategist today, the White House has confirmed. The Irish American’s future on the president’s staff had remained uncertain for some time amid claims that President Trump was looking for a way to oust him, especially irked by the way in which Bannon was being cast as the major manipulator who had won Trump the election.

"We are grateful for his service and wish him the best."

Rumors and speculation of a Bannon firing spread like wildfire through D.C. on Friday morning

On Friday afternoon, Politico reported that, according to a senior administration official, Bannon resigned on August 7, while others noted that Trump had been looking for a way to oust his chief strategist for some time as the West Wing grew tired of his behavior. Speculation grew on Friday as it was noted that Bannon did not attend a national security meeting with Trump at Camp David Friday on Afghanistan, despite his participation in the debate over troop levels.

The New York Times reported just before the White House announcement was made that Trump had told senior aides he wished to remove Bannon.

Earlier this week, Bannon drew more wrath from the White House for a string of on-the-record interviews he carried out in which he criticized other members of Trump’s staff. Bannon is known for his reluctance to speak on the record with the media, yet this week allowed himself to be interviewed by left-wing magazine American Prospect. As well as bashing his own rivals, Bannon also undercut Trump on North Korea, playing down the military might of the US if it the current standoff were ever to result in military action. The comment was worlds apart from the “fire and fury” Trump had promised to rain down on North Korea.

Just this week, Trump refused to guarantee Bannon would remain on his staff

Speaking last Tuesday in Trump Tower, the president had said, “We'll see what happens with Mr. Bannon,” refusing to guarantee that he would not be soon orchestrating Bannon’s departure from the White House, although still defending his honor and calling his former chief strategist “a friend”.

President Trump on Steve Bannon 3 days ago: "I like him, he's a good man. He is not a racist... But we'll see what happens with Mr. Bannon." pic.twitter.com/nq8CUyMRKp

Bannon’s departure is just another in a string of high-profile shake ups that have rocked the Oval Office this summer. In the past few months, Trump has fired Reince Priebus and Michael Flynn, two other aides who helped him win the presidency. Bannon’s  departure, however, is the most monumental as the man seen as the face of the nationalist wing among Trump’s base.

Journalist Gabriel Sherman revealed that a source close to Bannon told him that a return to Breitbart could be on the cards, where the former head would begin to wage a war against Trump. "It's now a Democrat White House," the source said.

A source who spoke to Jake Tapper, however, said that Bannon was committed to continuing to fight for Trump's agenda whether he was in the White House or not.

Source close to Bannon: he's prepared to continue fighting for POTUS's agenda inside or outside; doesn't know what decision has been made.

Bannon's firing may be another move in the play of new Chief of Staff John Kelly to gain more control and structure in the White House.

What do you think of Steve Bannon's departure? Let us know in the comments section below.