Members of Sinn Féin unfurled a banner reading "a united Ireland is for everyone" inside the ancient ringfort of Grianán of Aileach in Co Donegal. 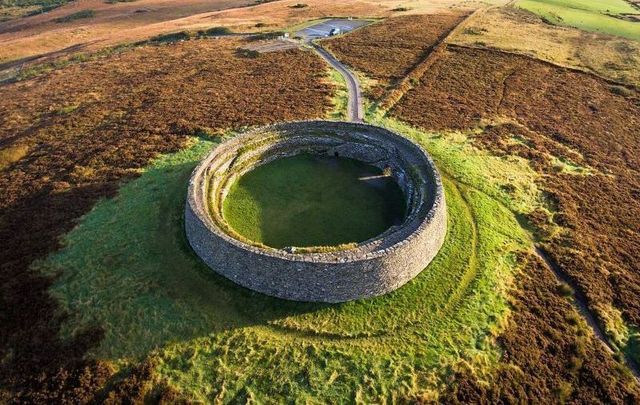 An aerial view of Grianán of Aileach in Co Donegal. Ireland's Content Pool

Irish police are investigating several Sinn Féin activists who ignored the instructions of a tour guide to unfurl a political banner at a national monument in Co Donegal.

Gardaí are investigating a complaint from the Office of Public Works after members of Sinn Féin unfurled a large banner inside the iconic ancient ringfort of Grianán of Aileach in County Donegal.

The banner said “A United Ireland is for Everyone – Let’s talk about it” and featured Sinn Féin’s logo, according to The Irish Times.

The Irish Independent reports that "two carloads" of Sinn Féin activists ignored the instructions of a lone female tour guide, who told them that they couldn't use the monument for political purposes.

The party says that its members were unaware of the rules prohibiting the use of the ringfort for political purposes.

Sinn Féin has now removed a video of the unfurling of the banner at the monument from its social media accounts.

Minister for Office of Public Works Patrick O'Donovan condemned the incident and confirmed that the OPW had made a complaint to An Garda Síochána.

"The use of Ireland’s national monuments and heritage sites for political purposes is completely inappropriate and this incident should not have occurred.

"The OPW’s guidelines are clear that no filming of a political nature is permitted and the matter has been referred to An Garda Siochána," O'Donovan told the Irish Independent.

Gardaí confirmed that they are conducting inquiries into the incident while the OPW has written to Sinn Féin to inform the party of filming rules at Ireland's national monuments.

"OPW’s policy is clear that heritage sites should not be used for advertising or promotional purposes, including messaging of a political nature. A review of permissions applications indicates that permission was not sought or issued for this activity." the OPW said in a statement.

Sinn Féin did not seek permission to film the video at the Grianán of Aileach ringfort, the OPW confirmed.

The incident occurred on June 29 and came to the attention of OPW headquarters in Dublin on July 5.

Sinn Féin said that its members were unaware of any rules prohibiting the use of photography at the site and also said that activists had "very little interaction" with the tour guide at the monument.