Sinn Féin TD Rose Conway-Walsh apologized after likening vaccine certifications to the segregation endured by Rosa Parks in the US. 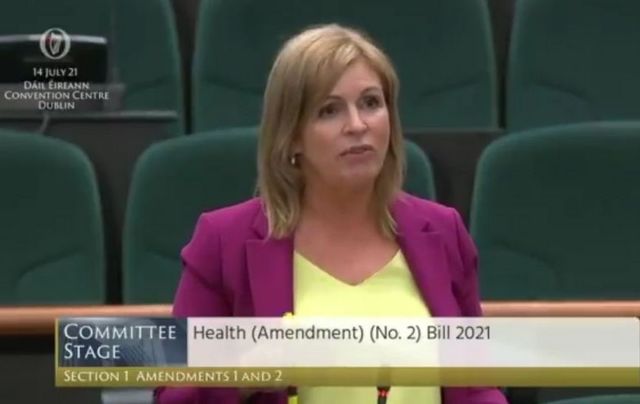 TD Rose Conway-Walsh made the remark during a Dáil debate over the Government's plans to introduce a vaccine certificate for anyone wishing to dine indoors.

"It's becoming more and more obvious as the evening goes on that this legislation is completely unworkable and unjust," the Mayo TD said during a debate over the legislation.

"And I really thought of Rosa Parks. And I thought of the segregation that is being done here. And to say that people are being treated differently but they are not being discriminated against is just plain wrong."

Rosa Parks was an American civil rights activist who is famously remembered for her protest of segregation on buses.

Conway-Walsh's comments were met with widespread criticism on social media.

The Sinn Féin TD apologized for the remarks in a tweet on Thursday and said that she regretted making the reference.

"Yesterday when speaking in the Dáil I made a reference to Rosa Parks that I regret when attempting to make a wider point about segregating people. The two situations are in no way comparable and would not want to ever imply that they are. I apologize," Conway-Walsh said on Thursday.

Yesterday when speaking in the Dáil I made a reference to Rosa Parks that I regret when attempting to make a wider point about segregating people. The two situations are in no way comparable and would not want to ever imply that they are. I apologise https://t.co/ybTCKidPB9

"Is that where we've come to now, back to 1933 in Germany, we'll be all tagged in yellow with the mark of the beast on us, is that where we're going?" McGrath said while speaking to media on Tuesday.

McGrath's comments were criticized by the official Auschwitz Museum, which directed the Independent TD to a seven-chapter online course on the destruction of European Jews.

The account said that comparisons between the humiliation, torture, and murder of Jews between 1933-1945 and the vaccination of people against COVID-19 was a "sad symptom of moral and intellectual decline".

Instrumentalization of the tragedy of all people who between 1933-45 suffered, were humiliated, tortured & murdered by the hateful totalitarian regime of Nazi Germany to argue against vaccination that saves human lives is a sad symptom of moral and intellectual decline.