Speaking at the Sinn Féin Ard Fheis on Saturday afternoon, Mary Lou McDonald said the Irish and British Governments should form a partnership as a "plan B" if the Northern Ireland Executive is not restored. 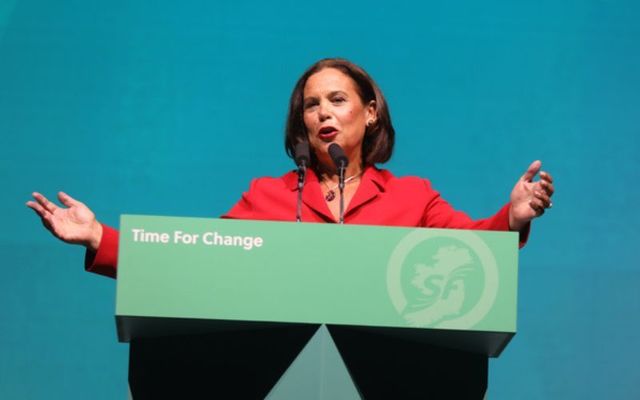 Mary Lou McDonald speaks during the Sinn Féin Ard Fheis at the RDS in Dublin on Saturday. Rolling News

Sinn Féin President Mary Lou McDonald has called for joint authority from Dublin and London if power-sharing is not restored in Northern Ireland.

Speaking at the Sinn Féin Ard Fheis on Saturday afternoon, McDonald said the Irish and British Governments should form a partnership as a "plan B" if the Executive is not restored.

She also spoke again about the prospect of "taking the final steps" toward a united Ireland.

McDonald said she has spoken to Taoiseach Micheál Martin about the issue of joint authority and said there needed to be clarity.

"It means not turning back the clock. It means for those sections of political unionism who hanker for yesterday, yesterday is not available, only tomorrow, the only way is forward," McDonald told reporters on Saturday.

"In the event that the DUP continue to sabotage the institutions, continue to refuse to nominate a deputy first minister to work hand in glove with Michelle O’Neill, a first minister for all. If that continues, well then, of course, the governments have to have a plan B, one of partnership, one of a joint authority."

The DUP has refused to enter into government with Sinn Féin, citing concerns about the Northern Ireland Protocol.

"People know that is the real reason behind the DUP's blockage," O'Neill said on Saturday.

O'Neill demanded a "very clear statement" from the British Government about what it is going to do next about the stalemate in Northern Ireland, including clarity about its plans for a second election.

"If they are going to extend the time to call an election, the purpose needs to be to find an agreed way forward to make the protocol work and all those talks need to continue in earnest," O'Neill said.

"I think people need the clarity, that we're not simply going to be in an endless stalemate, in endless limbo."

O'Neill previously called on the Irish Government to "insert itself" into a joint partnership approach, stating that there cannot be a return to direct rule from the British Government alone.

Sinn Féin made history during Northern Ireland's most recent elections in May by becoming the first nationalist party to win the most seats in the Northern Ireland Assembly.

The British and Irish Governments have both downplayed the prospects of joint authority as the stalemate continues in Northern Ireland.

Northern Ireland Secretary Chris Heaton-Harris said the British Government "will not countenance" joint authority, while Irish Minister for Foreign Affairs Simons Coveney said it was not the "focus" of the Irish Government during a recent visit to Belfast.

Loyalist paramilitaries have also warned of "dire consequences" if joint authority is imposed in Northern Ireland.

In a letter to unionist politicians at the end of October, the Loyalist Communities Council (LCC), an umbrella group of loyalist paramilitaries including the UDA and the UVF, wanted that joint authority would not be tolerated under any circumstances.

"There are no circumstances in which joint authority would be tolerated, and any effort to impose it would inevitably have dire consequences for the progress made from 1994 onwards," the LCC said in a letter last month.

"In such circumstances, loyalist activists who have worked tirelessly for peace (even in the most trying of circumstances, such as the injustice of the Protocol) would be powerless to prevent an unprecedented reaction."

Separately McDonald said on Saturday that it is time for a new Irish Government, adding that young people have been "badly let down" by a "cozy club" of parties that have been in government for a century.

"I know that change is very much on people’s minds. Change is the common denominator all across the island," McDonald said during the Ard Fheis on Saturday.