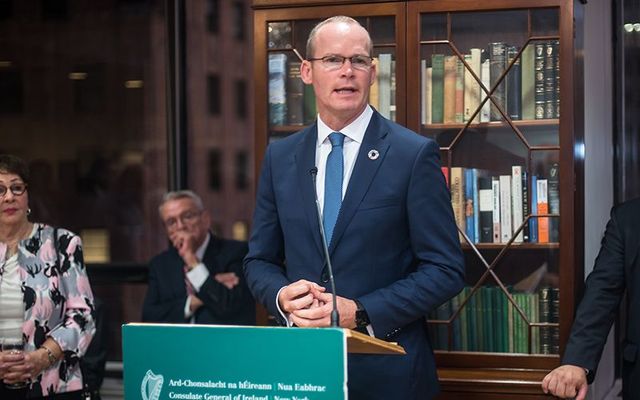 Simon Coveney speaking at the US Consulate in New York.

The Irish leader, Varadkar announced a number of cabinet changes on Thursday. Heather Humphreys was named as Minister for Business, Enterprise and Innovation while Josepha Madigan is the new Minister for Arts, Heritage and the Gaeltacht.

Varadkar said “Appointing the Minister for Foreign Affairs and Trade, Simon Coveney TD, as Tánaiste will enhance his role in the Brexit negotiations currently underway and will make it easier for him to coordinate the work of other departments with respect of Brexit.

Very proud and humbling day for me. To be appointed Tanaiste and Dept PM of Ireland is an enormous responsibility - I will do everything in my power to serve everyone in our country with integrity and positivity - thank you for the privilege.... pic.twitter.com/a48d29xFf4

“In appointing Minister Humphreys to the Department of Business, Enterprise and Innovation, for the first time in seven years the Minister will be from outside the Dublin region, and also from the Border.

“This is particularly relevant in the context of Brexit and also the Government’s commitment to bring more jobs and good jobs to all regions of Ireland, especially rural Ireland. Heather’s experience as a minister and also her background in banking and finance makes her very suited to this role.

“Minister Madigan will build on the work of Minister Humphreys in the Department of Culture, Heritage and the Gaeltacht, and will drive forward the Government’s agenda for arts, culture and heritage, including the Creative Ireland program, an ambitious ten-year capital plan for the arts and multi-annual increases in funding for culture and heritage.”

It was their parliamentary party, Fine Gael, who pressed Varadkar into appointing Coveney to the position. Last year Coveney was defeated by Varadkar, in June 2017, in the Fine Gael leadership race.

Fitzgerald resigned due pressure from opposition parties, including Fianna Fáil, over when she first learned of the police’s legal strategy to attack the credibility of Garda whistleblower Sgt Maurice McCabe at the O’Higgins commission. The commission is examining issues in the Garda’s Cavan-Monaghan division.