The White House Press Secretary made an unfortunate gaffe on Wednesday morning while defending General John Kelly, appearing not to understand that JFK stood for John F. Kennedy. 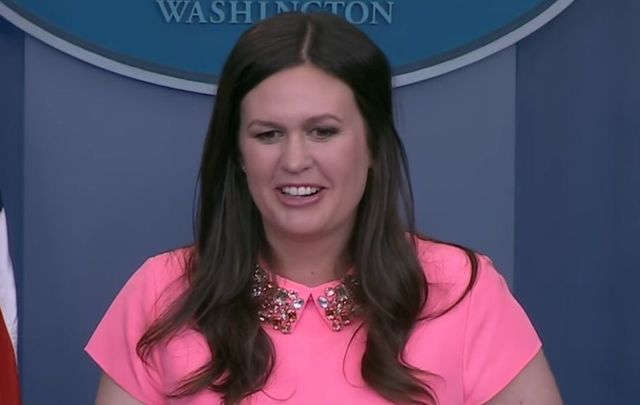 White House Press Secretary’s defense of General John Kelly did not go completely as desired as she names two Kennedys as president. WikiCommons

While some Americans may wish US history contained two Kennedy presidents, JFK and John F. Kennedy were very much one and the same, a fact White House Press Secretary Sarah Huckabee Sanders appeared to struggle with on Wednesday morning. She named both a JFK and a Kennedy as former US presidents.

"Washington, Jefferson, JFK, Roosevelt, Kennedy – that doesn't diminish their contributions to our country, and it certainly can't erase them from our history,” she continued.

“And General Kelly was simply making the point that just because history isn't perfect, doesn't mean that it's not our history."

While we’re sure that the Press Secretary simply misspoke while reading from her comments, or at least we really hope that this is the case, it is disturbing to think that, as an Irish person, you could know more about the US Presidents than a person in a serious role at the White House.

After the entertainment that some people drew from the mistakes of previous Press Secretary Seán Spicer, social media users were quick to ensure that Huckabee Sanders would not be allowed to let this one slide by:

Obama is our JFK & our Kennedy, according to Shuckaby... https://t.co/22Z3qYhPjs

I THINK Kennedy shot JFK. pass it on! #SarahSanders

I couldn't decide if I wanted to be JFK or Kennedy this Halloween so I ended up just drinking a lot instead of either. #SarahSanders #russia

Not only did Sarah Huckabee Sanders compare General Lee to JFK, but she also thinks JFK and Kennedy are two different presidents.

Others, however, commented that the Press Secretary misspeaking was very much the least serious and important part of her briefing, in which she defended Kelly’s Trump-like echoes that “both sides” are responsible for racial violence, a comment Trump made after violence in Charlottesville in August where he appeared to refuse to condemn white supremacists rallying to retain a Lee statue.

There are a lot to question/criticize about that briefing today & Kelly's words. I don't think Sarah repeating JFK & Kennedy is one of them

"I would tell you that Robert E. Lee was an honorable man," Kelly said in the interview with Fox News' Laura Ingraham.

"He was a man that gave up his country to fight for his state, which 150 years ago was more important than country. It was always loyalty to state first back in those days. Now it's different today. But the lack of an ability to compromise led to the Civil War, and men and women of good faith on both sides made their stand where their conscience had them make their stand."

In her defense of Kelly’s comments, which caused much controversy on Tuesday night, Huckabee Sanders stated: "I don't think that we should sit here and debate every moment of history. I think those moments took place. There are moments that we are going to be a lot less proud of than others, but we can't erase the fact that they happened. I think you have to determine where that line is. The president has said that those are something that should be left up to the state and local governments, and that's not who I'm here representing today, so I'm not going to get into the back and forth on it."

Just in case Huckabee Sanders needs a quick refresher, IrishCentral's Five things to know about President Kennedy should help her on the right track.

White House Chief of Staff General John Kelly believes the Civil War was all down to an "inability to compromise." Do you think the General's statements are wrong or do you agree that Lee was an "honorable man?"