Nationalist Irish political party was quick to dispel illusions that a man so widely disliked in Ireland had donated to their party. 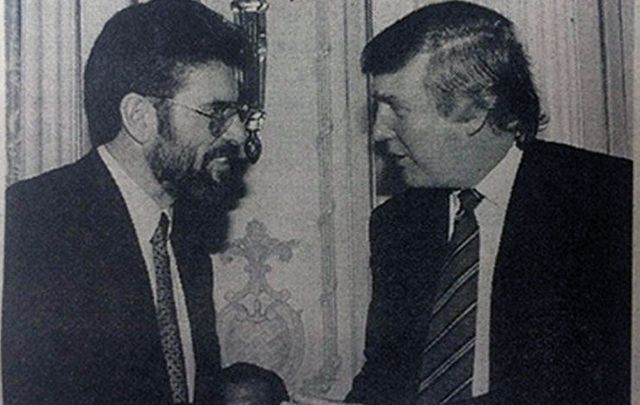 Sinn Féin have flat out denied that Donald Trump once donated to their party. The statement came after Micheál Martin, the leader of Fianna Fáil (Ireland’s second biggest party), used to President’s presence at a $200 per head Manhattan fundraiser to tease the party.

“President Trump’s knowledge of Ireland remains roughly on a par with that when he was welcomed to a Sinn Féin fundraiser by Deputy Gerry Adams,” Martin told Dáil Éireann (Ireland’s Parliament).

“On that occasion, a couple of months before the Canary Wharf bombing, Deputy Gerry Adams spoke admiringly of Trump, even saying Sinn Féin was happy to play ‘the Trump card’.”

Martin’s speech was a revelation for Taoiseach (Prime Minister) Leo Varadkar who smirked that he was, “fascinated to hear that President Trump attended a Sinn Féin fundraiser” and that the remarks had left him “very curious”.

However the party moved quickly to dispel any illusions that the billionaire had given them any kind of financial support in 1995 and said Trump had merely graced them with his presence.

“Donald Trump attended that Sinn Féin event in New York in 1995, but did not make a donation to the party. He has not attended any subsequent events and has never donated money to Sinn Féin,” a spokesperson told The Journal.ie.

Trump’s presence has previously lead to accusations of hypocrisy as at the time Sinn Féin was the political wing of the IRA - an organization that been historically committed to uniting Ireland through armed struggle, albeit on a ceasefire in 1995.

Whilst the President has taken a tough line of Islamist terrorism - introducing a ban on people from several Muslim majority nations and calling for the reintroduction of torture for suspected terrorists - video footage suggests he was felt at ease attending an event for an organization that explicitly supported terrorism.

Read more: Donald Trump Jnr could have learned about the Russians from Michael Collins

The 1995 event took place mere months before an IRA detonated a bomb in Canary Wharf that killed two people and injured a 100.

At the fundraiser Adams, who was on his first trip to the United States, singled out Trump and said, “This is not the Trump Tower, but I think I would…” before moving over to shake Trump’s hand.

Trump then gave a wave to the crowd who cheered him.

At the time The Guardian speculated that Trump, “would have seen a group of demonstrators protesting ongoing IRA violence, including victims of the 1993 Shankill bomb massacre in which 10 people died.“There were also protests from the relatives of Catholics who had been shot, beaten and exiled by the IRA even after the organization declared its first ceasefire on August 31, 1994.”