Clinton thought the line “what you have left is wondering if anyone will ever say ‘I love you’” might resonate with Donald Trump. 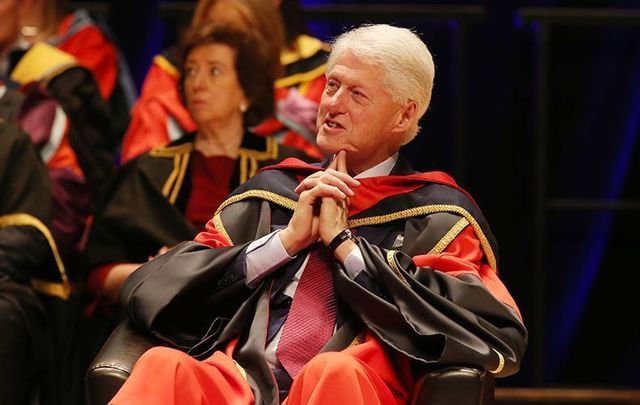 President Clinton stated that Donald Trump should know the second verse of 'Danny Boy' “because it reminds you that you can be very big, very famous, very rich, very powerful, very able to push other people around, to hold them down, to lift them up. But what you have left is wondering if anyone will ever say ‘I love you’.”

The lines he refers to are “O Danny Boy, O Danny Boy I love you so.”

Bill Clinton mouthing along with the words of Danny Boy here at DCU pic.twitter.com/kBySIzNdhN

The former president was receiving an honorary degree at Dublin City University for his work on Irish peace. He stated that tribalism has hurt international cooperation and conflict resolution.

“Alas, here we are back in the soup all over the world, fighting the same old battles we’ve been fighting ever since people came out of the caves. Pope Francis said we should live in a culture of encounter. Not that we should agree with each other all the time. Not that everybody should be right all the time. That’s really what the Good Friday accord did.”

Clinton stated he used the Good Friday accord example all over the world.

The agreement had been reached because people had chosen democracy, which was not just about majority rule, he said.

“It’s minority rights and individual rights and the rule of law and the absence of violence as a tool of political advancement,” he said. “

Shared decision-making, shared economic benefit and special ties to the Republic of Ireland as well as to the United Kingdom. There had never been any peace agreement exactly like [it] before. It broke like a thundercloud across the world.”

On Brexit he said Britain got it wrong.

“If we approached family in the way we approached this debate all over the world, people would run fleeing from their homes the moment parents gave an instruction they didn’t like,” he said.

“All partnerships that are community-based are held together not because everybody agrees with everybody else but because co-operation is better than conflict.”