The former President was due in Northern Ireland to help break the political stalemate but with that canceled he took a stroll around a quiet Dublin city center as Hurricane Ophelia raged. 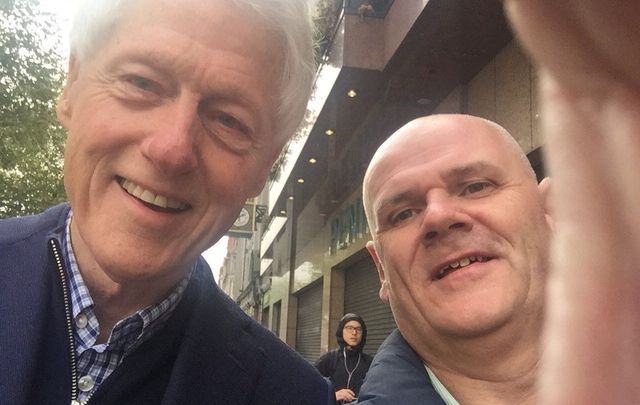 Ignoring Irish Government advice, Bill Clinton has been out and about in Dublin town today, taking in the sights during Hurricane Ophelia.

The former US President turned heads when seen going about his business on a nearly empty O’Connell Street as if the worst storm to hit Ireland in 50 years wasn’t happening.

Clinton canceled a planned trip to Belfast today in an attempt to break Northern Ireland’s political stalemate as the weather warning meant most politicians wanted to stay home.

A source told Thomson Reuters that, “He’s keen to help,” and could potentially travel tomorrow afternoon when the worst has passed. He’s also due to receive an honorary doctorate from Dublin City University “in recognition of his leadership in building and consolidating peace and reconciliation on the island of Ireland”.

Read More: How Martin McGuinness and Bill Clinton made peace in Ireland

Some speculated that the Dublin Fire Brigade were giving the former US president a gentle warning with this tweet:

There are still people walking the streets, notably tourists. Everyone should take shelter at this stage while #Ophelia is at its strongest

Meanwhile, all schools, colleges and many businesses in Ireland remain shut; three fatalities have been confirmed so far, 360,000 homes in the Republic have lost power as have 18,000 in the north.

Winds of up to 90mph have been recorded and it’s likely to be several days before the cost of the damage is fully estimated.

Cycling home along Dame St there, getting buffeted by winds and thinking i'm an eejit. Then BOOM! Bill Clinton waltzes past. #Ophelia