Paul Givan and Michelle O'Neill were installed during a special sitting of the Northern Ireland Assembly earlier today, June 17. 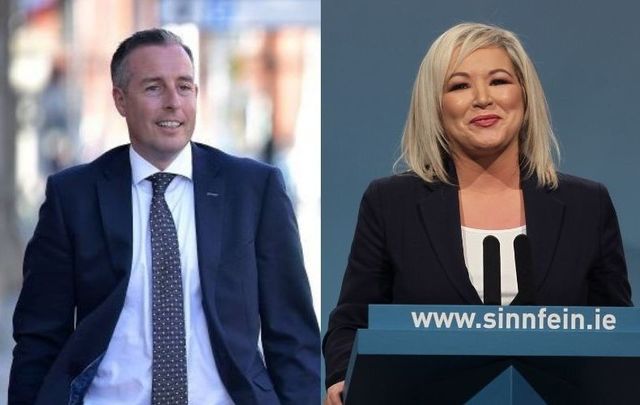 Paul Givan replaces former First Minister Alene Foster, who formally stepped down from the position earlier this week after she announced her resignation on April 28.

Givan and O'Neill were installed during a special sitting of Northern Ireland's Assembly on Thursday, June 17. The positions needed to be filled before Monday, seven days since Foster's resignation, otherwise a snap election would have been forced.

During the special sitting on at about noon local time on Thursday, newly-appointed DUP leader Edwin Poots nominated Givan for the role, while Sinn Féin's Conor Murphy nominated O'Neill for the role of Deputy First Minister.

Despite the titles, Givan and O'Neill are joint heads of government in Northern Ireland and hold equal amounts of governmental power.

After the installation, Givan thanked Poots for putting his confidence in him and paid tribute to his predecessors.

"There is much goodwill from the public for this place to work and for our politics to work for everybody. We must all recognize that there is much more that we have in common than separates us," Givan said.

Speaking after Givan, O'Neill said that the "top priority" of the Executive is COVID-19.

Of the five-party coalition government, O'Neill said: "We do not and will not always agree, but we're adults, and we can get around the Executive table, we can give our perspectives, we can voice our views and take decisions collectively in the best interest of the people we're elected to serve."

The installations come after the British government agreed to legislate for Acht Gaeilge, the Irish Language Act, in Northern Ireland. The legislation includes the creation of Irish and Ulster Scots commissioners and the establishment of an Office for Identity and Cultural Expression and is an unfulfilled commitment within the 2020 New Decade New Approach deal.

The British govt have agreed to legislate for Acht Gaeilge. This is the only way to break the cycle of DUP blockage of rights.

We will nominate Michelle O'Neill as deputy First Minister.

We have work to do to rebuild the economy and tackle hospital waiting lists. #AchtAnois pic.twitter.com/zm8vqKG9XO

There was speculation that Sinn Féin might not have consented to the DUP's nomination of Givan if the legislation was not agreed to, which could have, in turn, forced a snap election.

However, Northern Ireland's Secretary of State Brandon Lewis confirmed that he had received the nominations from both the DUP and Sinn Féin and would proceed with the installations.

I am pleased to announce that I have secured commitments from the DUP and Sinn Féin on the nomination of a First Minister and deputy First Minister.
I now expect this to happen at the earliest opportunity - later this morning!

However, in the wake of Lewis' announcement that he accepted both the DUP and Sinn Féin's nominations, some members of the DUP emailed Poots seeking an urgent meeting.

In the email, which was sent on Thursday before the installations, several DUP members said: “We note the announcement made by the Secretary of State in the early hours of this morning that both you and the Sinn Féin leadership have agreed to nominate a First Minister and deputy First Minister on the basis that Westminster will legislate on the Irish language and other matters if the Assembly fails to do so by October. We are also in receipt of your email this morning regarding this agreement.

"We are very concerned about this development and therefore, are urgently requesting that you meet with us as DUP Members of Parliament and peers to explain the basis of your agreement with the Secretary of State and Sinn Féin before any further steps are taken in this process, including the nomination of a First Minister.

"Assuming you will have prior consultation with your Assembly Group, we would be happy to join this meeting.

“You have often spoken of the need for accountability and transparency within our party and it is now essential that you consult with us as representatives of the people of Northern Ireland before you proceed further. We look forward to hearing from you thereto.”

The email was signed by seven of the DUP's eight MPs, while other senior members of the party, including chairman Lord Morrow, also signed the email.  Poots' close ally Ian Paisley Jr. was the only DUP MP not to sign the email.