The chairperson of Democrats Abroad Ireland discusses the impact of overseas voting in the 2020 US presidential election. 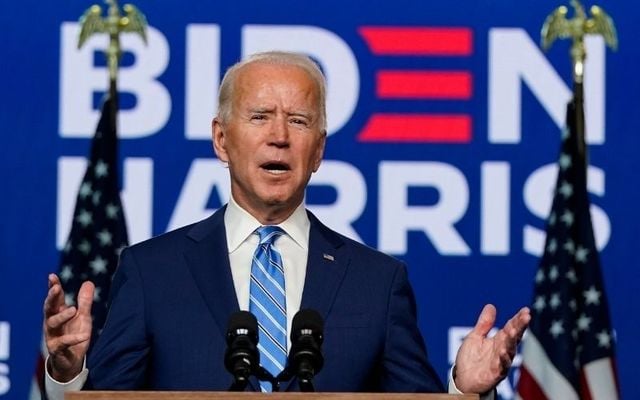 Joe Biden addresses the media after the November 3 election day in the US. Getty Images

Overseas voting could have played a huge role in Joe Biden's success in several swing states that are believed to be key to the 2020 presidential election, according to the chair of Democrats Abroad Ireland.

Carija Ihus, Chair of Democrats Abroad Ireland, said that more than 1.8 million overseas Americans have voted in this year's election, almost double the tally of the 2016 election, and that it has been having a crucial role in swing states like Michigan and Pennsylvania.

President Donald Trump led in many pivotal states by a seemingly insurmountable lead on the night of November 3 thanks to a huge number of in-person Republican voters on election day, but Joe Biden has overtaken the President in several states thanks to mail-in ballots and absentee voting.

Biden is now on the brink of winning the presidency and owes a good deal to American citizens overseas, who have been voting and campaigning like never before, Ihus said.

In Michigan, for example, where Joe Biden clawed away at a significant Trump lead to eventually win the state, overseas voters appear to have played a huge role in turning the state blue.

Over 30,000 Americans living in just one region of Canada, for instance, have voted in Michigan in this year's election, something that almost certainly aided the Democrats caused if recent overseas trends are considered.

Ihus said that trends in recent US elections show that around 85% of overseas voters tend to lean Democrat, with about 10% leaning independent and just 3% leaning Republican.

If that trend was indeed repeated in 2020, then overseas voting almost certainly gave the Biden Campaign the necessary push to overtake Trump in Michigan.

And overseas voters could yet play a part in the nail-biting race in Pennsylvania, which could ultimately decide the entire election.

President Trump held a lead of about 700,000 votes on Wednesday night in Pennsylvania, but that lead has again been cut significantly due to mail-in ballots and absentee voting and his lead now stands at just 140,000 votes.

Ihus said that Pennsylvania was one of four US states that saw the highest numbers of overseas voters, proving yet again that overseas votes could become increasingly pivotal in deciding the presidential race.

"I've been saying for the last two weeks that we're cautiously optimistic. We have a lot of good numbers that have turned out from foreign countries. We've had 210% more requests for ballots in Ireland than in 2016 and more than double the amount of voters from overseas," Ihus told IrishCentral.

As Trump loses ground in several key swing states, his campaign has filed contentious lawsuits to challenge the extension of ballot deadlines in Pennsylvania and to segregate late absentee ballots in Georgia.

The President has also frequently tweeted phrases like "stop the count" since Tuesday's election in an apparent attempt to question the integrity of the mail-in ballot system.

However, Ihus, who represents a community of American citizens that rely almost exclusively on mail-in ballots, said that the President's attempts to challenge and discredit absentee ballots and mail-in voting was simply "throwing anything at the wall to see what sticks".

"He said for a week that he doesn't trust it and he's gone to the Supreme Court in Pennsylvania to shorten the length of time that votes can be accepted. He's doing similar in Georgia by trying to get them to count fewer ballots and he's saying he's going to sue for a recount in Wisconsin and Michigan as well.

"It's one of those things where it's very frustrating but it's not unexpected. It just feels like he's throwing anything at the wall to see if it sticks to try and retain power."

The Democrats Abroad Ireland Chair said that she didn't believe that a member of the Democrat Party would launch similar campaigns to discredit mail-in voting but that they would more than likely accept the result.

"If it were a Democrat and they were in the same shoes maybe they would be doing the same thing, but I don't think Democrats would be calling for the counting to be stopped because we don't like the results.

Ihus believes that the chances of successful voter fraud are very low and that voter suppression or repression is much more commonplace in the United States.

However, she said that it would be difficult for an elderly person living on their own and cocooning during the COVID-19 pandemic to procure a witness without risking their own health.

"Voter fraud is historically very, very low, but he [Trump] and the Republicans like to say that it's a lot higher than what it is.

"We've only had a handful of cases of voter fraud in 240 years of elections in the United States. We are much more likely to have voter repression, suppression, or disenfranchisement than we are to actually have a voter go and vote twice."

Ihus said that, ultimately, every single vote should be counted in the US election.

"It's not up to the President or Joe Biden as the opposing candidate to decide who is victorious. It is up to the American people to decide and they deserve to have their voices counted."