How will 18-year-old Irish African American beat the seasoned competition? He’s got some plans… 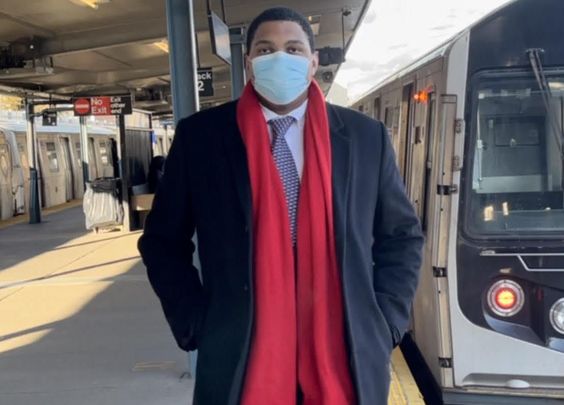 Can an Irish African American teenager become the next mayor of New York, one of the most high profile, difficult jobs in the world?  Thomas Downs, 18, says absolutely.

Whoever wins November’s election for mayor of New York will inherit a hugely challenging job of bringing the city back to itself after the pandemic.  Independent candidate Thomas Downs, the son of an Irish immigrant, believes he’s got the tools to do just that.

That’s not a typo, and Downs, born and raised in Manhattan, is no novelty act.  He’s been consumed by politics for years, knows the ins and outs of the city’s landscape by heart, and feels he’s just what New York needs as it continues to grapple with all the harm caused by Covid-19.

“I think we have a very good shot, especially as the Republicans and Democrats will each nominate just one person from their primary election,” Downs told the Irish Voice during an interview this week.

“There will be some other independents too, but I think that a lot of my plans are pretty reasonable and I actually have ideas to pay for the plans. I can give people hope, and I think I’m a very feasible candidate to win.”

That’s a mighty boast for someone so young and politically inexperienced, but Downs speaks easily and knowledgeable about what ails the city and isn’t playing around.  He’s gathered more than 5,000 signatures to get on the November 2 ballot – he only needed 3,750 – and he expects the Board of Elections to certify him as an official candidate in the next few days.

And then it will be full steam ahead – though Downs has been planning for a City Hall run for several years now.

He’s the son of Ronan Downs, a Dublin-born restaurateur who is an owner of several downtown Manhattan establishments, including Beckett’s Bar and Grill, Stone Street Tavern and The Dubliner.   His mother is Carletta Downs, an African American who is involved in several Irish organizations, including the Origin Theatre Company which she serves as board chair, and the Self Help Africa charity. 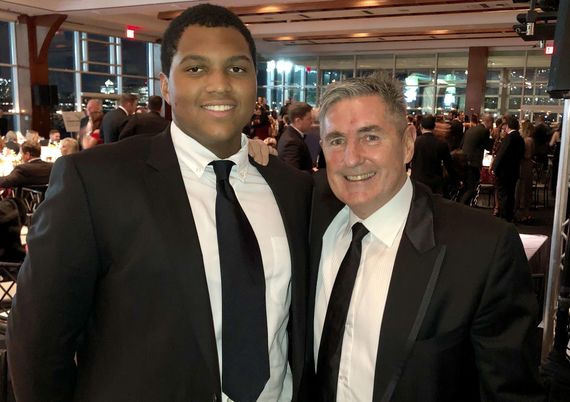 Thomas Downs and his father Ronan at a Self Help Africa event, pre-pandemic.

“Thomas is a great young fella.  He really loves the city and he’s always spoken about running for mayor.  I’ve never seen anyone his age know so much about city politics as he does. We’re very proud of him,” Ronan Downs, who immigrated to New York in 1974, told the Irish Voice.

Thomas says he’s been plotting his mayoral run “for four of five years now,” fleshing out ideas for things he feels would benefit the city’s five boroughs while balancing high school classes at Fordham Prep in the Bronx, which he graduated from in 2020.

“The older I got, the more I realized my plans were actually pretty realistic and I think we could do a lot of good with them,” he feels.

Those plans include revitalizing the city’s infrastructure, investing more in education, helping small businesses get back on their feet post-pandemic, and creating a New York where everyone feels they are safe, equal and have the same opportunities – all of which and more he details on his website, www.downsformayor.nyc.

Those admirable goals have been expressed by the present mayor, Bill de Blasio, and the current crop of candidates seeking his job.  But Downs feels that too often city officials use band-aid solutions instead of properly thought out plans containing plenty of community input.

“I really love this city, and I want to do anything I can to help the people who live and work here.  The government needs to work for the people,” he says.

“We need leaders who really listen, who come to the neighborhoods and find out what your problems are and not be afraid to work with you to create solutions.  If we don’t talk to our communities it just leads to a lot of issues that we see throughout the city today.” 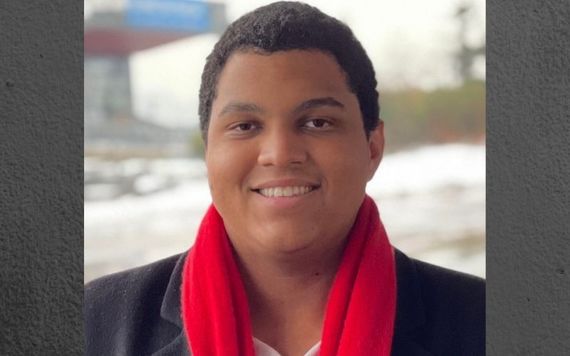 Downs, who lives on the Upper East Side with his family – he’s the middle of three children, the eldest of whom is a firefighter with the FDNY – registered as a Democrat and cast his first vote last year in the presidential election.  But he says he doesn’t feel particularly aligned with Democrats or Republicans.

“When I registered to vote I felt like I had to choose a party,” he says.

Once Downs is certified by the Board of Elections he plans on revving up his social media and fundraising activities.  He says he’s also been working with some political consultants who have offered advice and guidance.

The New York City primaries on June 22 will whittle the crowded Democratic field down to one – the primary winner is usually considered a shoo-in for the mayoralty given how heavily Democratic the five boroughs are – but Downs vows he’ll be ready to run hard right through to November.

“The big thing for me is not being part of the political system,” he says.  “(Democratic contender) Eric Adams is someone I have real respect for and I think he’s done a lot of good work in city government, but I think that kind of work can also lead to being stuck in a mindset where you can’t think outside the box.”

Speaking of another front runner, Andrew Yang, Downs feels he’s flip-flopped on too many issues and isn’t fiscally conservative enough.  His universal basic income proposal, “from what I can tell now, it would expand our welfare system which I don’t think benefits New Yorkers as much as it should.  I think we have to have systems that actually help people get out of the welfare system and create positive change and lift them up instead of just forcing them to stay in a system.”

Downs is a supporter of the NYPD and feels new methods of training officers are necessary.  As an African American teenager he doesn’t feel threatened by law enforcement, and defunding the police is not part of his agenda.

“I think the protests last year and the Black Lives Matter movement really helped to address a lot of issues within our current system, especially for minorities and people of color, but I don’t support defunding the police to the extent that it’s been proposed,” he says.

“I don’t see how it’s feasible to both defund the police and then increase their training to deal with a variety of situations.”

Downs has visited Ireland with his parents “at least 50 times,” he laughs.

“My first passport was an Irish one. I love it there and I feel very Irish.  We spend a lot of time in Dublin, Cavan, and Sligo.  I attended the fleadh two times in Sligo and it was great. It’s definitely more relaxed over there.”

His parents are excited about his mayoral aspirations.  “I try and make things as easy as I can on them,” he says.

He agrees that city politics is an obsession of his, “but I would say I have a lot of other obsessions too, like infrastructure and budgeting and public housing, transportation, parks, so all my interests combined really make me someone who would be perfect for being mayor.”

Downs has worked in some of his father’s restaurants during summers off from school, but his sole job now is a full-time candidate.  His plan was always to take a gap year after high school to mount his challenge, and when asked what he’ll do after the November election, his answer matches perfectly with the most seasoned pol.

Check out his campaign video: