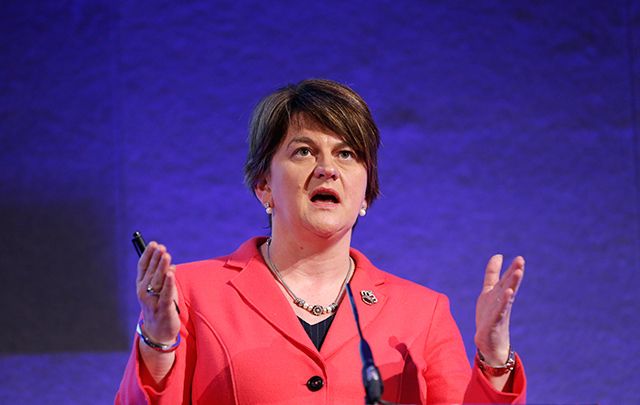 The leader of the DUP Arlene Foster. RollingNews.ie

DUP leader Arlene Foster has described herself as “uplifted” after visiting Irish language pupils at a Newry school.

The former First Minister’s Democratic Unionist Party has long had a tense relationship with the language and did little to endear herself to Irish speakers whilst in office; she famously ruled out an Irish Language Act in this year’s Assembly election, comparing Sinn Féin politicians who wanted one to hungry reptiles.

"If you feed a crocodile it will keep coming back for more," she said. Foster continued that she didn’t want to "reward bad behavior, and to capitulate to manufactured demands".

The comments galvanized Sinn Féin supporters and brought the party within a whisker of beating the DUP into second place.

Before power sharing can resume the two parties must come to an agreement on certain key issues and Sinn Féin has made the language’s future one of them. With talks stalled, rumors abound that the DUP is set to give into demands and compromise on the issue.

On Tuesday the DUP leader said, "It had become very much a political demand and as we talked about Irish, its culture and affirmation of identity in the talks, I felt that it would be good to step back from the Irish language as a political demand and to actually listen to people who loved the language and wanted to use it in their everyday lives. That is what I am trying to do.

"I am on a journey of doing that. I have met with some individuals already around why they believe Irish is so important to them."

After meeting 28 pupils studying the language at Our Lady’s Grammar in Newry, Co. Down, Foster even thanked staff as Gaeilge for showing her around.

Beautiful gift from Our Lady's Grammar School, Newry which I visited today. pic.twitter.com/vAU7nkWTCx

“We had a lovely piece of drama, we had a song. We listened to their experiences and it's wonderful.

"One of the very strong things that came across was the passion that the girls had for the language and it is really good to strip away all the politics out of this issue and just to listen in a very clear way as to how Irish and the language has helped in the study of other languages and to give them a head start in relation to job opportunities as well."

Reaction to the visit was mostly positive; although not uniformly so.

@DUPleader Great to see this, hope it's the first of many events to come.

@DUPleader maith thú - Irish belongs to all of us!

@DUPleader Will Arlene visit an Ulster Scots medium school next?
Oh no, there is no such thing - Protestants don't need education!

Considering where the last DUP journey that started from 'Never. Never' ended up, where will DUP Nua's Irish language journey end?

Foster also met with a delegation from The Gaelic League (Conradh na Gaeilge) later in the week, a meeting in which the DUP confirmed they are looking at content and legislative provision for the Irish language.

“Conradh na Gaeilge was happy to meet with the DUP and Arlene Foster today. Today’s meeting was a useful one, one in which we put across our proposals for an Irish Language Act and their associated costs as is laid out in the discussion document,” said Dr. Niall Comer, President of Conradh na Gaeilge.

"I believe we got a good hearing and we are hoping that the DUP will support an Irish Language Act after contemplating what we discussed with them today. The Irish Language Community have been waiting too long for the state to bring in legislation that will protect these language-related human rights – the talks period is almost over, and now is the time for action.”

According to the 2011 census, some 104,943 (6.05% of the Northern Irish population) claim to speak Irish to some degree, of whom  4,130 people (0.2%) use Irish as their primary language at home. Schools that teach through the medium of Irish are popular with parents.

Do you think Northern Ireland should have an Irish language act? Let us know your thoughts in the comments section, below.