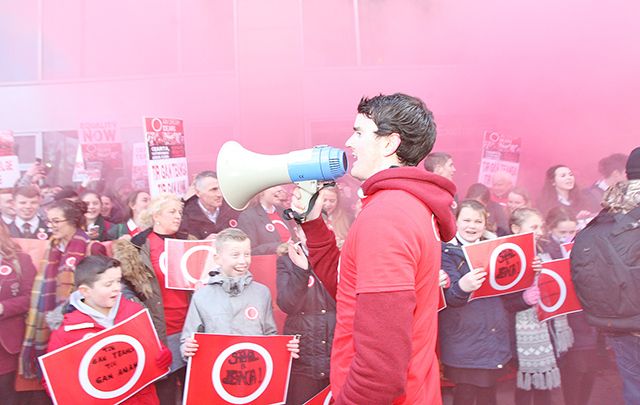 It is being called the straw that broke the camel’s back and helped bring down the power-sharing arrangements at Stormont. Two days before Christmas, DUP Communities Minister Paul Givan pulled the plug on a $61,500 (£50,000) Irish language bursary scheme that provided opportunities for young people from disadvantaged backgrounds to travel to the Donegal Gaeltacht to learn Irish.

Considering that at the time his party was embroiled in a botched green energy heating scheme that has the potential to cost the taxpayer in Northern Ireland as much as $507 million (£400m) over the next twenty years, to blame the ending of the Líofa Irish language bursary on the grounds of “efficiency savings” was not lost on the Sinn Féin grassroots.

And this is now being cited as one of the reasons why the republican party collapsed the power-sharing government on Monday of last week.

However, on Thursday morning last, and in what was seen by many political observers as an attempt to offer Sinn Féin an olive branch - and just hours before Irish language activists were due to hold a protest outside the Department of Communities headquarters in Belfast - Minister Givan performed a U-turn and reinstated the bursary.

As for Traditional Unionist Voice leader Jim Allister, he claimed the DUP was in “concession mode” and branded it a “humiliating climb down.”

The text of the St Andrews Agreement negotiated and signed up to by @duponline includes an Irish language Act pic.twitter.com/B6BiAUXJXK

Despite the DUP Minister’s move on Thursday morning, the protest still took place outside his department headquarters at lunch-time, with hundreds of Irish speakers taking part.

Organized by An Dream Dearg, a group first established in 2014, spokesperson Ciarán Mac Giolla Bhéin said: “We would like to thank the many thousands of people who have supported our campaign and stood with the most disadvantaged in our community whilst £500 million have been squandered through the RHI scandal [green energy heating scheme].

“Their support ultimately left the minister with no choice but to restore the Líofa Gaeltacht bursary scheme this morning.

“The aims of An Dream Dearg are much wider and more comprehensive than this Gaeltacht bursary scheme,” he said.

“The Irish language community are no longer willing to accept being treated as second-class citizens.

“Eighteen years after the Good Friday Agreement and more than ten years since the commitment to an Irish Language Act in the internationally binding St. Andrews Agreement of 2006, the Irish language community are #DeargLeFearg(red with anger) at the repeated failure of authorities to protect and promote our rights.”

DUP MLA Edwin Poots has claimed his party never agreed to an Irish Language Act when the St. Andrews Agreement was signed in 2006, however, insisting that then-British Prime Minister Tony Blair struck a side deal with Sinn Féin President Gerry Adams regarding the language issue.

The Agreement, signed by the DUP, Sinn Féin, and the British and Irish governments pledged: Government would introduce an Irish Language Act reflecting on the experience of Wales and Ireland and work with the incoming Executive to enhance and protect the development of the Irish language".

Poots now argues that the DUP have honored all aspects of St. Andrews they agreed to before signing.

We have never at any point indicated a desire to bring in an Irish language act,” said the former Northern Ireland Health Minister.

"We have honoured what we said we would do."

"The DUP negotiated the St Andrews agreement - we never agreed to an Irish language act. We have done what we said we would do. We have done nothing dishonourable.

"The DUP is too strong. Sinn Fein want a weaker brand of unionism to deal with and we have no problem facing up to that.”

Nelson McCausland tells @BBCTalkback that an Irish Language Act would "break the bank of Northern Ireland". No, Nelson. That's #RHI

In response, Sinn Féin’s Conor Murphy claimed that Potts comments indicated the unworkable relationship his party has suffered from the DUP.

"This shows it is not about money, it's about an antipathy toward a language … People want to see rights protected.

"It was in St Andrews agreement and therefore up to the parties to introduce it."

Do you think an Irish Language Act is needed in Northern Ireland? Are Sinn Féin asking for too much or are the DUP avoiding the responsibility they signed up to under St. Andrews? Let us know your thoughts in the comments section, below.

This story originally featured in the Irish Echo. You can read more from there here.