McGuinness headstone refers to the former Deputy First Minister as an “óglach”, the word used for a member of the IRA. 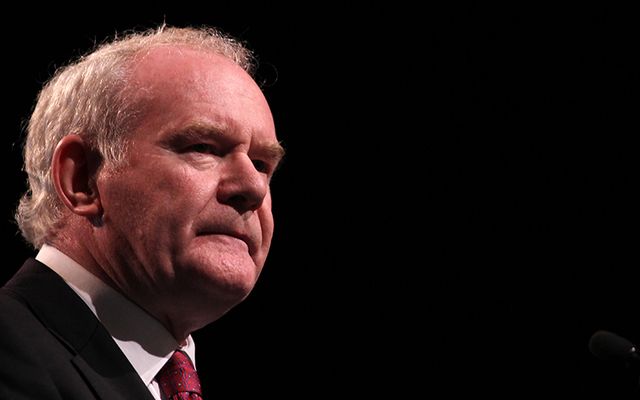 Unionist politicians have claimed that the headstone of former Northern Ireland Deputy First Minister Martin McGuinness proves his continued links to the IRA until his death, despite the Derry man’s moves into the political sphere in later decades.

While many of McGuinness’ obituaries highlighted his journey towards peace and reconciliation in the later stages of his life, East Derry DUP MP Gregory Campbell and UUP politician Doug Beattie were among those to voice their belief that the reference to “Óglaigh na hÉireann”—the Irish language term meaning “soldiers of Ireland” taken on by some factions of the IRA—on McGuinness's headstone show that he was, in fact, “wedded to the IRA until he died”.

While”Óglaigh na hÉireann” is the term the IRA use for themselves, “Óglach” is the name of a “volunteer” in the IRA or one of their members.

The Celtic cross design also includes a quote from McGuinness himself—“We have to govern by treating every single citizen equally”—as well as a message from his wife and children.

“For those who were caught up in the hyperbole at the time of his passing and burial, however, it ought to serve as a reality check,” said Campbell of the headstone stating that it would come as “no surprise” to some people that IRA references would be made.

“The inscription of ‘volunteer’, along with the use of the Irish term for the ‘IRA’, are there as lasting testimonies to terror.

“Long after the eulogies have faded, those who got carried away with some of the media’s attempted elevation [of Mr. McGuinness] to statesmanship can now see for generations to come what those closest to him want everyone else to remember him as.

“The only good that can come from this engraving is that now those who are prepared to look for the unvarnished truth can do so, on a headstone that will be there for generations to come.”

Martin McGuinness took risks for freedom and peace and we are closer to reconciliation because of him - @MaryLouMcDonald pic.twitter.com/Yr66OFhs9W

“People allowed themselves to be duped. People looked and thought, ‘Look, he has moved on and become a politician now and everything he did in the past was in the past’. What I am saying is that it wasn’t.

“I find it hard to harmonize the two sides of Martin McGuinness.

Speaking at the unveiling of the headstone over the weekend, Sinn Fein deputy President Mary-Lou McDonald spoke about the lengths McGuinness had gone to achieve peace.

“Martin McGuinness, whose heart came alive and kept faith with the Bogside,” she said.

“Martin McGuinness, who fought, who made peace and who will never be forgotten. Martin led from the front, he took risks for freedom and risks to build the peace.”

Sinn Féin politician Martin McGuinness died in Derry on March 21, 2017, aged 66, after a short illness. The former member of the IRA's Army Council, Sinn Fein leader and Deputy First Minister of Northern Ireland, was diagnosed with a rare heart condition in December 2016. He resigned in late January 2017 and his role as leader of Sinn Féin in Northern Ireland was taken over by Michelle O’Neill.

While his involvement in the IRA was not forgotten in eulogies, tributes were made to the Northern Ireland politician’s involvement in securing the peace process and to his work towards democracy in a troubling time in Irish history.

What do you think of the inscription on Martin McGuinness’ headstone? Let us know your thoughts in the comments section.