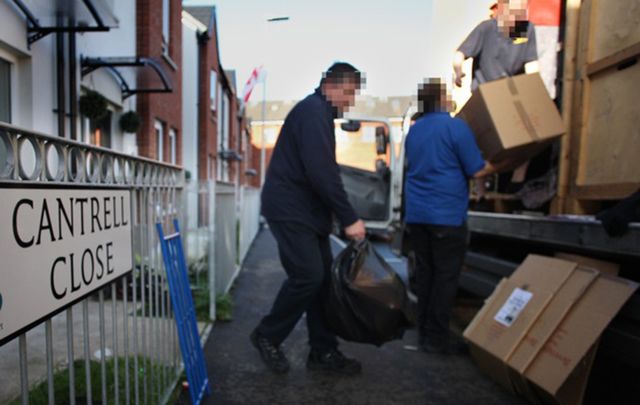 A Catholic family moves possessions from their home in Cantrell Close in Belfast. The faces have been obscured in the photo for the family’s protection.

Catholic families returned to their South Belfast homes on Saturday to collect their possessions and to close the door on their dream homes for the final time.

The families were last week forced to flee their Cantrell Close homes in the Ravenhill area in the dead of night after police arrived to tell them that they were under threat from loyalist paramilitaries.

Over a year ago the families moved into their new homes in the new estate which was built for Catholics and Protestants to live together, under a scheme organized by the power-sharing executive at Stormont.

However, during the summer, loyalist and UVF flags were put up on lampposts in the area, which was viewed as an attempt at intimidating the Catholic residents.

Loyalist and UVF flags were put up on lampposts in the area. Image: RollingNews.ie.

In the early hours of last Wednesday morning, four young Catholic families fled their homes when police warned them that they were at risk of attack. Suspicion has focused on the Ulster Volunteer Force.

While the police have been heavily criticized for not protecting the families, the DUP MLA for the area, Emma Little-Pengelly, has also been criticized for her initial reaction to the flags going up in June when she said the majority of residents she had spoken to “didn’t want a public fuss around this matter.”

Now and in light of the recent developments, she said she was trying to ascertain “if or how credible” the threat is and who issued it.

“All intimidation is wrong. I am offering help and will be contacting the housing association and PSNI.”

The police have been heavily criticized for not protecting the families. Image: RollingNews.ie.

Later in a joint statement with DUP MLA Christopher Stalford, the two branded the intimidation “disgraceful" and said those responsible “must be identified and face the courts.”

Sinn Féin South Belfast MLA Máirtin Ó Muilleoir (Ó Muilleoir is chairman of the parent company of the Irish Echo from which this article is reposted) was scathing of the threats and the PSNI’s response.

“This is the culmination of a PSNI policy, which I have criticized repeatedly, of enabling the nefarious activities of the UVF in East Belfast,” he said.

Thnx RadiusHousing & NIHE for rapid work 2 ensure Jodie & her family got a new home today after being forced from Cantrell by paramilitaries pic.twitter.com/nm7d9Vi0Dr

“This policy of go-along-to-get-along is evidenced by the fact that four days after the PSNI passed on these threats to the Catholic families in Cantrell Close, there has been no statement from the Chief Constable and no arrests made. Incredibly, the PSNI claims it is unable to identify the source of the threat.”

Ó Muilleoir continued: “The PSNI is alone in being unaware of the fact that the UVF in East Belfast was behind the encircling of the Cantrell and Global development with loyalist and UVF flags before the homes were completed; was behind the erection of UVF and other flags in the area during the summer to intimidate Catholic families, and is now behind the threats on four families.

No need for shame, vast, vast majority of people of Belfast repudiate these sectarian bigots https://t.co/B1LschOysA

“It’s not lost on the wider community of South Belfast that these same paramilitaries endorsed the DUP before the June election and then mobilized their members to vote for the DUP.

“It’s time to make a fuss about the hate-merchants and thugs who want to turn the clock back to 1969. They must not be allowed to do so.”