Truss announced her resignation in a statement that she read outside Number 10, Downing Street, on Thursday afternoon. 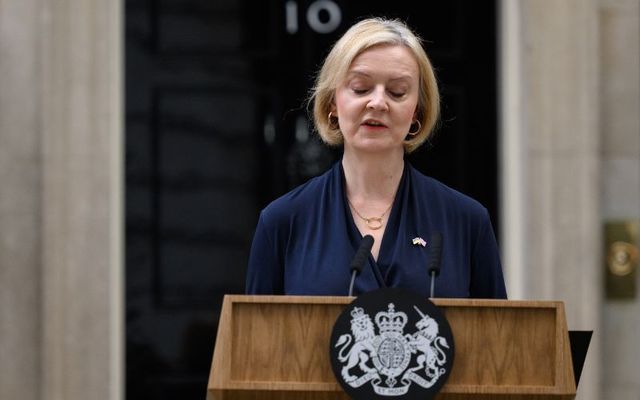 Prime Minister Liz Truss announces her resignation as she addresses the media outside number 10 at Downing Street on October 20, 2022 in London, England. Getty

Truss announced her resignation in a statement that she read outside Number 10, Downing Street, on Thursday afternoon.

Truss said she became Prime Minister at a time of "great economic and international instability", adding that she was elected with "a mandate to change this".

"I recognize, though, given the situation, I cannot deliver the mandate on which I was elected by the Conservative Party," Truss said.

"I have therefore spoken to His Majesty the King to notify him that I am resigning as leader of the Conservative Party."

Truss said she would remain as Prime Minister until a successor is chosen during a leadership election next week.

Her downfall began shortly after she assumed office when former Chancellor of the Exchequer Kwasi Kwarteng announced a mini-budget that promised the "biggest package" of tax cuts in generations.

The mini-budget was championed by Britain's right-wing press but caused untold financial carnage, damaging Britain's reputation on the international stage. deepening the cost-of-living crisis, and causing the pound to plummet to record lows against the dollar.

Facing mounting political pressure, Kwarteng resigned as Chancellor and was replaced by Jeremy Hunt, who undercut Truss's authority by reversing the majority of measures introduced in the mini-budget.

Already hanging on by her fingertips, Truss was dealt another devastating blow on Wednesday following the resignation of Home Secretary Suella Braverman, who quit after a "technical breach" of security rules.

In a scathing resignation letter, Braverman accused Truss of breaking "key pledges" from her leadership campaign, including a commitment to reduce immigration.

"Pretending we haven’t made mistakes, carrying on as if everyone can’t see we have made them, and hoping that things will magically come right is not serious politics," Braverman wrote.

Braverman's resignation plunged the Conservative Party into chaos, collapsing party discipline in the House of Commons on Wednesday.

Sir Keir Starmer, the leader of the UK Labour Party, called for an immediate general election in the wake of Truss's resignation, claiming that the Conservative Party had shown that it "no longer has a mandate to govern".

"After 12 years of Tory failure, the British people deserve so much better than this revolving door of chaos," Starmer said.

"The British public deserve a proper say on the country's future. They must have the chance to compare the Tories' chaos with Labour's plans to sort out their mess."

Ireland's Finance Minister Paschal Donohoe said the Irish Government is monitoring the effects of the British political situation on the Irish economy.

Donohoe described the UK as a "vital ingredient" of Ireland's economic prospects.

"Ireland has always been a close friend of the UK and of the government of the UK. Even during tough and challenging moments during the Brexit process, we always affirmed the value of close friendship," Donohoe said.