Irish American Kimberly Guilfoyle is a featured speaker for the first night of the 2020 Republican National Convention. 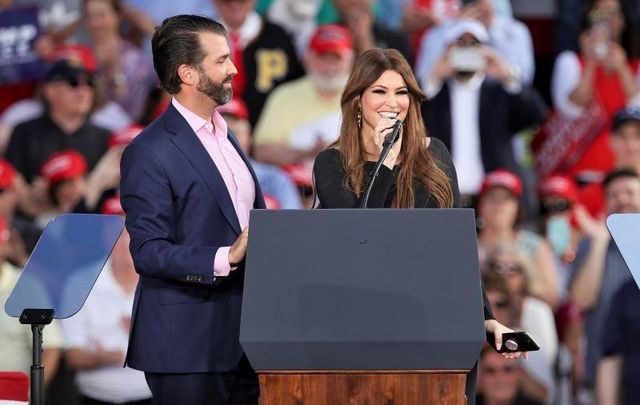 President Trump and Vice President Pence have secured enough votes for the renomination during the first day of the 2020 Republican National Convention.

Irish American Kimberly Guilfoyle, the chair of the finance committee of the Trump Victory Committee, is included in the line up of speakers for the first night of prime time events for the 2020 Republican National Convention.

According to the Trump campaign, the theme for Monday’s event is "Land of Promise," which seeks to "honor the promise America holds to its citizens and the promises President Donald J. Trump has kept since his first presidential campaign."

Of Guilfoyle, the Trump campaign says: “Kimberly Guilfoyle leads the fundraising powerhouse between the campaign and the Republican National Committee as the National Chair of Trump Victory Finance Committee. She also serves as one of the campaign’s senior advisors. She joined Fox News Channel in 2006 as a legal analyst. Prior to her broadcasting career, she served as an assistant district attorney at the San Francisco and Los Angeles District Attorney's Offices.”

Can’t wait to deliver remarks tonight as we kickoff the Republican National Convention. President Trump has restored America’s promise, and I truly believe that the best is yet to come!

Guilfoyle’s father, who passed away in 2008, emigrated to the US from Ennis in Co Clare when he was in his 20s.

“I grew up partly in Ireland,” Guilfoyle has said. “Every summer from the age of five, I lived in Ennis where my Guilfoyle relatives had businesses on O’Connell Street — a gift shop called Dalcassian House, and Dalcassian Printers. I worked in the shop, which sold lovely china and Waterford Crystal."

On St. Patrick's Day 2020, Guilfoyle announced the launch of "Irish Americans for Trump:"

So excited for the launch of #IrishAmericansForTrump. My father immigrated from Ireland to America in pursuit of the American Dream. A dream that has never been more accessible than it is today under @realDonaldTrump!#HappyStPatricksDay ☘️ ? https://t.co/u9yGfo5uf1

You can watch the first night of the 2020 Republican National Convention here from 9pm EST:

The prime time event for the first night of the 2020 Republican National Convention is scheduled to begin at 9 pm EST on Monday, August 24,  just hours after President Trump and Vice President Pence secured enough votes for renomination as president and vice president.

Vice President Mike Pence, who also has strong Irish roots, made a surprise appearance at the in-person event hosted in Charlotte, North Carolina on August 24. Pence thanked delegates “for the honor of this day” after being unanimously renominated alongside President Trump.

During his remarks, the Vice President said: "I'm here for one reason, and one reason only. And that is, not just the Republican Party, but America needs four more years of President Donald Trump in the White House.”

The crowd then erupted into chants of “Four more years!,” which also later greeted President Trump when he later took the stage to speak.

“Now if you really want to drive them crazy, you say ‘12 more years!’” Trump said, “because we caught them doing some really bad things in 2016 so let’s see what happens.”

He later said: “We have to win. This is the most important election in the history of our country.”

You can watch the proceedings from the renomination of President Trump and Vice President Pence on Monday, August 24 here:

The 2020 US Presidential election will be held on Tuesday, November 3.