Joe Biden has been using the Bible for every swearing-in ceremony since 1973. 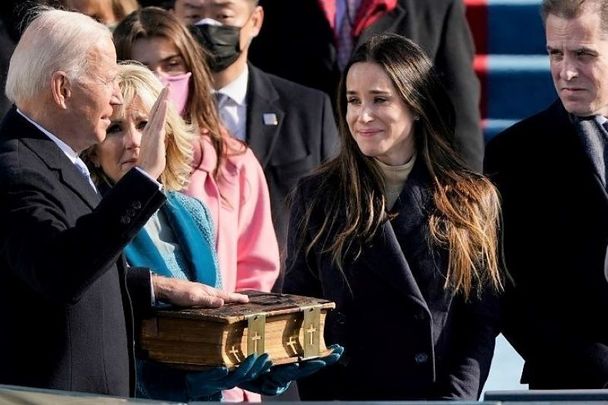 January 20, 2021: Joe Biden places his hand on his family Bible as he takes the Oath of Office. Getty

Joe Biden kept up a long-standing tradition when he was sworn in as President on Wednesday by using a huge family Bible with a Celtic cross emblazoned across the front cover to take the Oath of Office.

Biden has used his ancestors' Bible, which dates back to 1893, for every swearing-in ceremony since 1973 when he was sworn in as a United States Senator from Delaware in a nod to his Irish heritage.

The five-inch thick Bible was held by Biden's wife Jill as he took the oath during Wednesday's inauguration ceremony and Biden previously explained the Bible's significance in an interview with talk show host Stephen Colbert.

"It's just been a family heirloom on the Biden side of the family, and every important date is in there," Biden told Colbert. "For example, every time I've been sworn in for anything, the date has been on that and is inscribed on the Bible."

Biden first used the Bible on January 5, 1973, when he was sworn in as a US Senator. His two sons - Hunter and Beau - were in hospital at the time recovering from the car crash that claimed the lives of Biden's first wife and daughter, so Biden took the oath in a Wilmington hospital.

He has since used the Bible for six subsequent swearing-in ceremonies as a US Senators in addition to both inaugurations as Vice President in 2009 and 2013. One of Biden's Senate ceremonies even had to be delayed because he had trouble finding his Bible.

His son Beau also used the Bible when he was sworn in as Delaware's Attorney General in 2007.

Almost every US President has been sworn in using a Bible, with some choosing to take the oath with a Bible of historical significance and others using a personal Bible.

Barack Obama, for instance, used Abraham Lincoln's 1861 inauguration Bible in 2009 and used a Bible that once belonged to Rev. Martin Luther King Jr. for his second inauguration in 2013.

Other presidents, however, have used more personal Bibles for their inaugurations.

Franklin D. Roosevelt used his family Bible for all four of his inaugurations, placing his hand on a different text during each ceremony, while President John F. Kennedy used a family Bible and ond used by George Washington in the first inauguration ceremony in 1789 when he was sworn into office in 1961.

Washington's inauguration Bible has been used by three other presidents during their inauguration - Warren G. Harding, George W. Bush, and Dwight D. Eisenhower.

During Washington's 1789 inauguration at Federal Hall in New York City, attendees noticed that a Bible was not on hand and retrieved one from St. John's Masonic Lodge No. 1.