"The government and NPHET... are creating their policies on the backs of envelopes and then labeling it as science. It is completely pathetic, delusional, highly damaging and dangerous.” 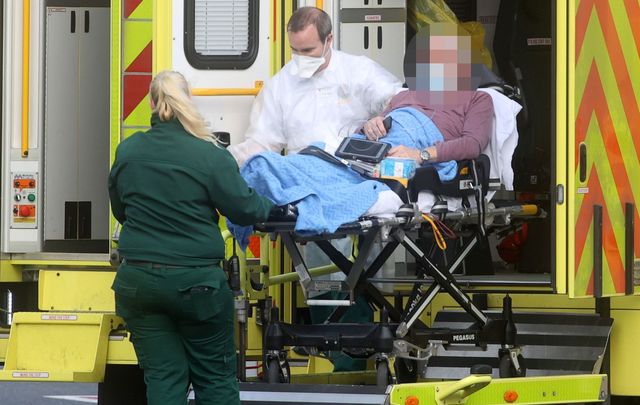 Nov 2021: An ambulance arrives to the Mater Hospital in Dublin. RollingNews

Deputy Mattie McGrath is part of a tide of criticism about the handling of the crisis as Covid is returning with a vengeance. Critics claim mixed messages, failure to move quickly on booster shots and major problems with the home testing antigen devices have made for a major crisis.

“The only certainty, after more than 600 days since our first reported Covid case, is that the government and NPHET (National Public Health Emergency Team) are creating their policies on the backs of envelopes and then labeling it as science. It is completely pathetic, delusional, highly damaging and dangerous.”

“With Ireland’s public healthcare service disintegrating at the seams, due to chronic mismanagement, the HSE set up by Michael Martin, when he was Health Minister, is an unaccountable and unanswerable runaway train.”

“During the pandemic, the glaring deficiencies of bed shortages, ICU capacity and a growing lack of accountability has been laid bare, with the waiting list backlog growing to around 1 million non-Covid patients. This means that around  one in five Irish citizens  are on a waiting list; yet, there has been no effective action plan from the Minister.”

“These evident deficiencies mean the government and NPHET's pandemic response is about confining people’s freedoms and rolling through lockdowns, of one kind or another.”

“Meanwhile, the originator of this unaccountable health system - Taoiseach Michael Martin - tells the public in a condescending manner to continue ‘playing your part’.”

“Well, I have a clear message for the Taoiseach: the public have played their civic part; however, it is you and your government's utter failure to ramp up hospital capacity and widen the toolkit of options to deal with Covid that has caused this current crisis, with heightened anguish and pain for many people and small businesses in the lead up to Christmas.”

“Since the beginning of this pandemic, my colleagues and I in the Rural Independent Group, have been calling for (1) a nationwide antigen testing system, (2) proper ventilation measures in our schools and public buildings, (3) at least 300 extra ICU beds, to bring Ireland closer to average EU ICU capacity, and (4) transparency and honesty with the public.”

“So far, everything that this government and the current Health Minister has done is about protecting the status quo and non-medical bureaucrats within our health service. This means the healthcare and Covid needs of ordinary citizens are being side-lined as the parasitic vested interests, responsible for this mismanagement, are protected.”

“Irish people deserve better than a grossly incompetent Health Minister, an arrogant Chief Medical Officer who has failed to protect our healthcare system and a dithering Taoiseach unwilling to take a stance to protect the patients and the public interest,” concluded Deputy Mc Grath.