Irish government to seek immigration deal in Washington this week 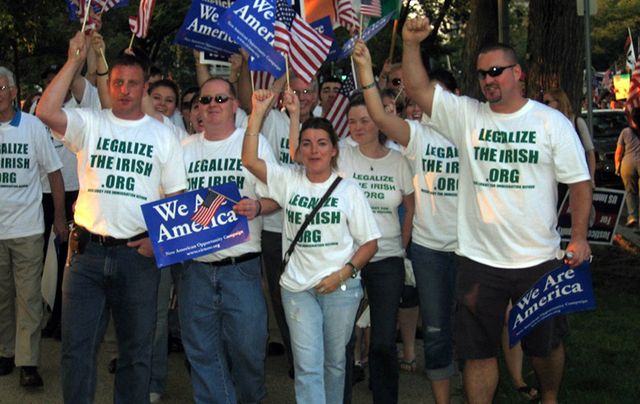 A group of Irish Lobby for Immigration Reform member campaigning in 2007 for a bilateral agreements between Ireland and US.

The Irish Government plans to engage with the United States to secure a deal for Irish immigration following Donald Trump’s announcement in September that the deferred action for childhood arrivals (DACA) program would be dismantled. A new immigration legislation bill is expected to be presented by US Congress by March 2018.

President Donald Trump’s controversial move to dismantle DACA, the “dreamers” law protecting the undocumented migrants who were brought to the United States as children, could mean an opportunity for the Irish to secure inclusion into the new legislation.

It is planned that the issue of the undocumented will feature strongly during Ireland’s Minister for Foreign Affairs, Simon Coveney’s trip to Washington D.C.

John Deasy, who was appointed by Taoiseach (Prime Minister) Leo Varadkar, as the US special envoy for the undocumented willl also accompany Coveney. Over the past few weeks he has had dozens of meetings with members, both Republican and Democrats, in the House and Senate on the matter.

John Deasy, the US special envoy for the undocumented

Deasy told the Irish Times “It’s clear now that immigration legislation dealing with DACA, border security and other issues has a reasonable chance of passage in the new year.

“This is now a real focus for us which will continue this week.”

Coveney and Deasy are expected to meet with senior political figures, including House speaker Paul Ryan and minority leader Nancy Pelosi, as well as the director of the office of management and budget, Mick Mulvaney.

A spokeswoman for the Department of Foreign Affairs said “We continue to engage with the US Congress and administration to explore all possible options for the undocumented.”

Read more: Coveney stands behind figure of 50k Irish undocumented in US

The Immigration act of 1965

For many years those lobbying on behalf of the Irish for immigration reform have stated that the “Australian model” could be a good fit for Ireland. Australian, a long-time military ally of the United States, was given a special E3 visa program when the United States-Australia trade deal was negotiated. This allows 10,000 Australians who have third-level education, and their spouses, to live and work in the United States every year.

How many Irish undocumented?

Recently research by the Pew Institute stated that the number of Irish undocumented living in the United States is closer to 10,000 rather than the 50,000+, which has been cited since before 2006. It is thought that this new lower figure could make a new deal for the Irish more palatable to the US government.

While in New York two weeks ago, Coveney pledged to support the Irish undocumented in the United States, no matter which number is correct.

It is believed that here are between 11 and 12 million undocumented people living in the United States. The new legislation in March may all include Trump’s plan to manage the Mexican border and deal with seasonal farm workers.