The father of an Irish DACA program recipient speaks of his frustration at the Trump administration’s decision to put an end to the program. 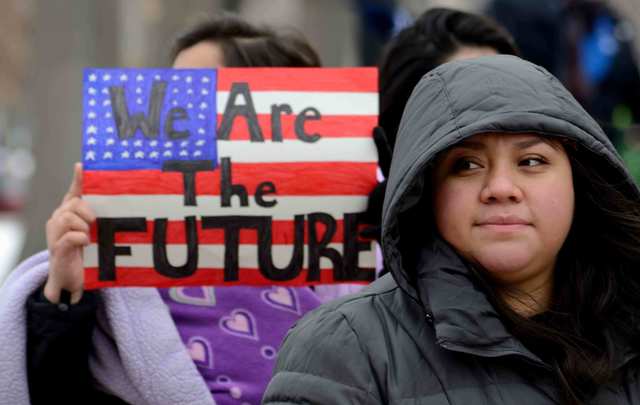 The promise of job creation and the idea of a “working-man's” President had initially led Cork-born Patrick, now living in Massachusetts, to support President Donald Trump despite having lived in the shadows as an undocumented immigrant in the US for the best part of two decades before becoming legal.

This week’s announcement that the Trump administration will be putting an end to the Obama-introduced Deferred Action for Childhood Arrivals program six months from now, plunging his 31-year-old DACA-recipient daughter back into the depths of uncertainty about her future in the country, has been the turning point for the now-US citizen as he returns to the darker days of worrying about his child’s legal status, let down by a President he had placed his faith in to protect the working American.

“He's a working man's person and I thought that he would be good for the country job-wise,” Patrick explains to IrishCentral.

“You know, listening to him speak about the undocumented, I thought he liked the kids [DACA applicants] and he spoke highly of the kids and then everything backfired.”

After Patrick moved to the US in 1999 with his wife, 12-year-old daughter, and 11-year-old son, the four members of Patrick’s family were undocumented but it was only after September 11 that it become a big issue.

Patrick's son later married a US citizen, settling his uncertain immigration status, and he eventually became a US citizen. Patrick and his wife were then able to gain legal status through their son. Patrick's daughter, however, has thus far not been able to regularize her immigration status and she remains fearful about her life in America after spending all of her teenage years and her entire adult life to date in the US.

After years of efforts to gain legal status, she finally received a green card interview at the Irish consulate in Dublin two years ago but was advised that it was not wise to travel home as she may not be able to return to the US if she did so.

“Now we're back to the situation we were in 10/15 years ago,” Patrick explains.

“It's possible she could lose DACA with Trump and it's nerve-wracking … She's 31 and she really can't get on with her life. She's still stuck in limbo.

“They [his children] were brought to the country by their parents and they had no choice in the matter … I brought my son and my daughter and I'm responsible for them. They're not responsible for their actions when they were 11 and 12.

Families are once again worried about the safety of their undocumented children with the ending of the DACA program. Image credit: iStock.

Compared to applicants from countries such as Mexico and Guatemala, the number of Irish applicants for DACA are few. Belfast-born immigration lawyer Christopher Lavery, who has previously worked with Patrick’s family on DACA and who assists with the Irish Pastoral Centre in Boston, has only one other Irish applicant among his cases in the state.  The Emerald Isle Immigration Center in New York says they have dealt with approximately a dozen cases.

“I haven't seen as many applicants in the Irish community as other communities,” Lavery explains to IrishCentral.

“I have 10 to 15 of these cases running and only two of them are Irish so I don't know that there are many Irish who haven't already been picked up.”

While Irish immigrants may not be as dramatically affected by the decision to end the protections afforded by DACA as other nationalities, Irish immigration centers and organizations around the country have voiced their dismay at the President’s decision, speaking out in support of DACA. They are calling on Congress to legislate to protect the DREAMers, so called as the would-be beneficiaries of the DREAM (Development, Relief, and Education for Alien Minors) Act that would give them a path to legal residency and citizenship.

“DACA allowed thousands of eligible children to come out of the shadows and live without the constant fear of detection and detention,” stated Kieran C. O’Sullivan, Immigration and Citizenship Advisor with the Irish Pastoral Center in Boston.

“It allowed children to go to school, work, live without fear and contribute in a meaningful way to the US economy.  The decision to end DACA will destroy the dreams of these young people who were brought to the US as children.

“To target this population of vulnerable young people is wrong and we call on Congress to immediately act to grant permanent status to those who availed of the DACA initiative.”

Michael Collins, the Executive Director of Chicago Irish Immigrant Support, also condemned the decision, highlighting how many DACA applicants have lived in the US for a majority of their lives through no fault of their own.

“It is inconceivable how they now find themselves in a vulnerable position because of their honesty and good will,” Collins said.

“There is a lot of anger at this decision and concern from those affected by it. In the context of DACA, it is important to remember that these young people know of no other home and did not break any laws to put themselves in this position.

“They have grown up as American children and should have the right to stay and continue their lives. These young people not only deserve to be protected by DACA but also deserve a pathway to citizenship. Hopefully, Congress will make this a reality for them.”

For many of these organizations, the DACA decision is a telling sign of the overall dysfunction of the US immigration system and the lack of knowledge and education the average US citizen has regarding the process.

“The biggest thing that I see amongst people who don't support DACA is that they probably just don't understand it fully,” believes Siobhan Dennehy, Executive Director of the Emerald Isle Immigration Center (EEIC).

“The bigger issue is that people say, ‘oh, they should come here legally.’ It's the biggest knee-jerk reaction … The problem is, we see every day, there is no mechanism for DACA currently, obviously, and for these kids or for anybody, to enter the US with a pathway to citizenship.”

Patrick would also have harsh words for those who would criticize DACA recipients or claim that they don’t deserve a pathway to citizenship.

“People have to be educated about the undocumented people, may they be from Mexico, Guatemala or whatever. They're getting nothing [for free] that I know of … I tried but there was nothing there for me,” he argues

“It's totally disgraceful how people treat them and what people are saying about them. My daughter never got free anything since she came to this country apart from going to school. She never got health benefits, we had to bring her to the hospital when she got sick and had to pay the hospital.”

For now, those on the DACA program are warned not to rest on their laurels or wait to see if Congress will pass an act to protect them.

The EIIC is also advising DREAMers to keep their documentation up to date, as well as suggesting they look into other paths to legalization that may be open to them.

“Those who have DACA should really consider looking into their other options, potentially speak with counsel, credible individuals who can assist them and maybe look at their case overall,” offers John Stahl, the EIIC’s Director of Legal Services and Immigration Attorney.

“There are figures out there who say that somewhere in the range of 30% of those who hold DACA status are also eligible for some other immigration benefit and could potentially become legal through a pathway they're not aware of. It is something to consider as the program potentially winds down for them, to take a look at their situation and take their destiny into their own hands, absent any further action on it.”

DREAMers and anyone else working on their own immigration status should proceed with caution, however, and seek sounds advice from trusted sources before handing over any money.

“There are potentially unscrupulous individuals who might seek to take some money and then take advantage of individuals in this really, really dire scenario and we offer ourselves up as a resource to counter anything like that,” advises Dennehy.

“We encourage people to reach out to us if they want a second opinion on something that they've heard either individually or in the community. That's the last thing we ever want to hear in our business, that somebody has been taken advantage of in that vein.”