House Democratic Caucus Chairman Congressman Joe Crowley has condemned the announcement that the Deferred Action for Childhood Arrivals program is to be ended. 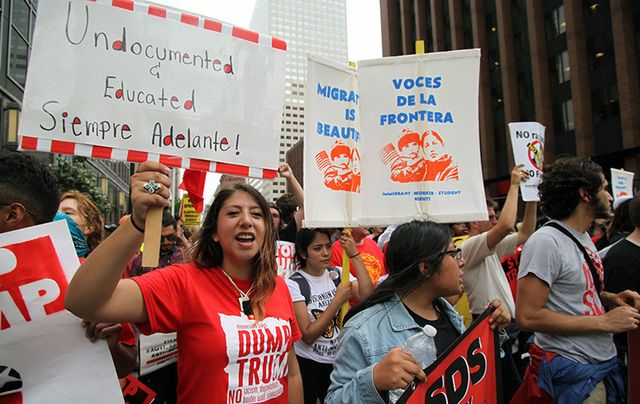 Young Hispanics support the Dream Act at the 'Stop Trump' march on the first day of the Republican National Convention in 2016. iStock

The Trump administration announced Tuesday that the Deferred Action for Childhood Arrivals program is to be ended.

The program, generally referred to as DACA, covers an estimated 880,000 young people who were brought to the United States by their parents who entered the country illegally, or who subsequently became undocumented.

There is believed to some Irish “Dreamers” as those covered by President Obama’s 2012 executive order are known.

That order that now been rescinded.

Attorney General Jeff Sessions announced Tuesday that there would soon be an end to the program.

"The program known as DACA that was effectuated under the Obama administration is being rescinded," Sessions said.

The attorney general said that the executive branch (under Obama) had "deliberately sought to achieve what the legislative branch specifically refused to authorize on multiple occasions."

The program will now fall into the lap of Congress, a deeply uncertain prospect.

President Trump has said that lawmakers should "get ready to do your job” though precisely what that job might be is far from clear.

The president is known to favor a revamped immigration system based on merit more than the current emphasis on family reunification.

Dreamers, brought illegally to the U.S. before they were 16 years old, have typically known no other country as their home other than the U.S.

The oldest Dreamers are now nearly 37 years old so will have lived for at least two decades in the United States.

The Hill newspaper reported that while the end of DACA is being framed as a six-month phase-out, the new guidelines still allow for some DACA enrollees to remain in the program and retain work permits well beyond that timeframe.

The announcement by Attorney General Sessions, not surprisingly, prompted an immediate outcry from Democrats, Irish American legislators to the fore, and supporters of Dreamers.

House Democratic Caucus Chairman, Congressman Joe Crowley said:  “President Trump’s decision to end the Deferred Action for Childhood Arrivals program would be shocking if it weren’t so predictable from a president who has routinely demonized immigrants, elevated politics above principles, and catered to the most extreme voices in his party.

“Given that today’s action comes after President Trump repeatedly claimed he wanted to help these young people, all Americans should realize how empty his promises are when compared to the reality of his political interests.

.@POTUS' decision on #DACA is immoral & unconscionable. I want every #DREAMer to know that I stand with them. We must #ProtectDREAMers! pic.twitter.com/ceNlijqUS5

“The DACA program has allowed nearly one million young adults to contribute to their communities. These are young people who believe firmly in the promise of the United States and consider themselves patriotic Americans. Under DACA, immigrant Americans have been able to go to college or start businesses.

“They’ve been able to protect our country in the military or aid the elderly and sick at home. In New York City, the DACA program has strengthened not just our economy, but our neighborhoods, as immigrants became community organizers fighting to improve our hometown. It is absurd to think that our nation’s interests are served by ending this program and forcing these individuals back into the shadows. Without a doubt, this action is both heartless and senseless.

“It is now time for Republicans in Congress to stand up,” said Crowley.

#DREAMers of today deserve the same chance that @realDonaldTrump’s mother was given. ↓ pic.twitter.com/GjiIgJijaH

“At a minimum, Congress must act to reverse this harmful and revolting policy change. Bicameral legislation has been introduced that would protect this population – and there is no reason for Republicans to delay bringing it to the House and Senate floors for a vote. I look forward to seeing whether my colleagues will stand up for what is right.”

Congressman Brendan Boyle, just back from a visit to Ireland, also condemned the move.

The Philadelphia Democrat said in part: “As the proud son of an immigrant myself, I am appalled by this shameless and irrational disavowal of our nation’s immigrant youth who contribute so much to our country every day.

“DACA has empowered 800,000 bright, promising young people, who were brought to this country through no choice of their own as children, to come forward out of the shadows and pursue higher education, work legally, pay taxes, and have a real place in the only country they call home.

95% of #DACA Dreamers work and pay taxes
100% don't have a criminal record
How does it help 🇺🇸 to deport them?

“Dreamers are our nurses, our teachers, our local business owners. They are Americans in every way but on paper. This heartless, illogical action is not part of any coherent plan to improve immigration or fight crime.”

“Studies show that ending DACA would cost Pennsylvania alone over $357 million in annual GDP losses, and cost the United States over $460 billion in GDP losses over the next decade. At least 72 percent of the top 25 Fortune 500 companies - including Apple, General Motors, Amazon, JPMorgan Chase, and Wells Fargo - employ Dreamers.”

Congressman Boyle is a co-sponsor of a bill, H.R. 3591, the American Hope Act, which would provide young undocumented immigrants who were brought to the U.S. as children with protection from deportation and an opportunity to obtain conditional legal status if they meet certain requirements.

That bill will now be drawn into a congressional process that President Trump wants to see results in a form of comprehensive immigration that would look very different to congressional efforts this far this century to deal with one of the nation’s thorniest political, social and economic issues.

The annoucement was, of course, criticized by former President Obama whose administration implemented DACA.

"To target these young people is wrong -- because they have done nothing wrong. It is self-defeating -- because they want to start new businesses, staff our labs, serve in our military and otherwise contribute to the country we love. And it is cruel. What if our kid's science teacher, or our friendly neighbor turns out to be a Dreamer? Where are we supposed to send her? To a country, she doesn't know or remember, with a language she may not even speak?" Obama asked.

"Let's be clear: the action taken today isn't required legally. It's a political decision and a moral question. Whatever concerns or complaints Americans may have about immigration in general, we shouldn't threaten the future of this group of young people who are here through no fault of their own, who pose no threat, who are not taking away anything from the rest of us."

Do you agree with the ending of the DACA program? Let us know your thoughts in the comments section.