Hey Donald, it’s immigrants like your mother and wife that make America great

In six months the Trump administration will terminate DACA, the Obama-era program that allows young people brought to the United States as children to live and work legally. 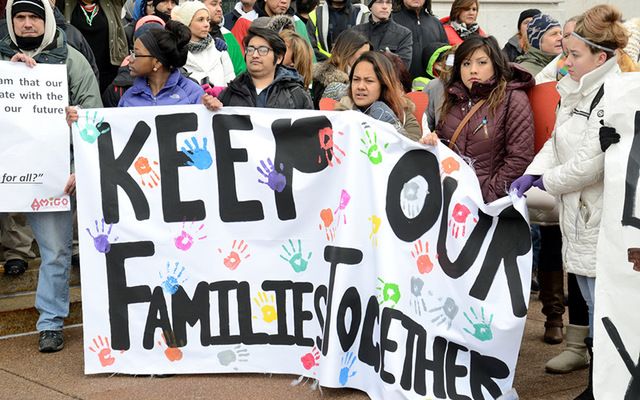 Protesting for the rights of immigrants and dreamers. iStockphoto

Trump's removal of DACA shows that he doesn't understand or care about what really makes America great.

The entire world knows that the opportunities this country offers to immigrants is what makes America great, but the world is slowly learning that making America great is not really Donald Trump’s intention at all.

The sight of an American president targeting vulnerable immigrants through the removal of DACA is a bit like watching a healthy body reject its own blood supply. It’s so staggeringly counterproductive you can hardly believe it’s happening.

Since the rain fell in sheets on his sparsely attended inauguration an increasing number of Americans are feeling like Donald Trump has taken the country and the planet hostage, stuffing us all against our will into his wheezing DeLorean time machine, bound for a lily white 1950.

Trump’s latest anachronistic Archie Bunker move on DACA will almost certainly lead to a massive counter shift in the public consciousness soon, because history shows his administration – with its barely concealed racism and bullying, it's shocking appeals to white supremacy, coupled with its minority bashing and its demonization of “lawless” immigrants – can't end well, for Trump or any of us.

Donald Trump is saying in every way possible that power in America is white, straight and male and all else are targets. #DACA

That’s because it is, on its face, spectacular hypocrisy. Two of Donald Trump’s wives are immigrants. His mother was an immigrant from Scotland. His current wife, Melania, the First Lady of the United States of America, is an immigrant. Trump has no excuse not to know how immigrants enrich the nation, often performing the tasks no one else will.

But yesterday a beaming Attorney General Jeff Sessions stepped before the cameras to announce that in six months the Trump administration will terminate DACA, the Obama-era program that allows young people brought to the United States as children to live and work here legally.

Sessions could have predicated his speech on DACA’s presumed legal standing, but instead he built his case on Breitbart level sound bites.

“The effect of this unilateral executive amnesty, among other things, contributed to a surge of unaccompanied minors on the southern border that yielded terrible humanitarian consequences. It also denied jobs to hundreds of thousands of Americans by allowing those same jobs to go to illegal aliens.”

This is untrue. In fact, in the northern parlance, it would be referred to as a giant bag of s—ite. The rise in unaccompanied minors crossing the border actually began in 2008 (due to children fleeing the escalating gang violence in Central America). DACA was introduced in 2012 and studies have shown it did not contribute to any surge in illegal immigration (new arrivals here would not have qualified to participate in the program in the first place).

Furthermore, there is no evidence that DACA recipients have purloined a single job from any qualified American, much less denied “hundreds of thousands” of them. Sessions' claim is nativist rabble-rousing, a racially charged libel made without a shred of supporting evidence.

This is GOP white nationalism in a nutshell. Breeding resentment by falsely suggesting whites are denied something given to an out-group. https://t.co/6E2yUiEBQw

What is really going on here is a clear tilt toward white nativism. Just days after his pardon of Sheriff Joe Arpaio for illegal racial profiling and the abuse of Latino people, Trump is showing us why he and Jeff Sessions are white supremacist Richard Spencer’s dream team.

But the thing is, each of those movements exist and they are stronger today than at any point in their history. They will not be bullied out of public life or legislated out of existence by a throwback administration that thinks it could better achieve its aims with their absence.

The kids walked into school pissed off, and told the teachers they were marching. pic.twitter.com/W3ReNKoVjV

Another longtime immigrant nation – Ireland – has some bad news for Trump and Sessions. Irish people who grew up in the North during the long decades of the Troubles have taken particular note of the tenor of these times, because we have seen this kind of Trumpian demagoguery before.

For decades in the North we witnessed blinkered politicians who believed that the future of their own electorate depended on oppressing everyone else.

We saw first hand the kind of society that is born out of that blatant favoritism. We saw what happens when all the disfavored social groups are made second-class citizens in their own country.

Taking the North down that sectarian path led to the eruption of violence and decades of civil conflict. We are appalled to see Donald Trump take the United States of America down a similar cul de sac.

Worse, we are appalled to see the Republican Party stand back in silence as he targets the most vulnerable among us because he has spectacularly failed to deliver on his larger legislative agenda.

91% of Dreamers are employed.

US would lose over $400 billion in GDP if they're deported

They have spotless records.

This is just racism.

Here’s what we learned in the North. The men who try to pass themselves off as hard men are usually the weakest. That is clearly true of Trump, who is reduced to cruel grandstanding and hostage-taking to camouflage his lack of real political leverage.

But we can see your hand all the way from Ireland, Donald – and it’s a losing one for both yourself and the GOP.