Ireland has had a nightmare start to vaccinations and should now seek help from the US says top commentator. 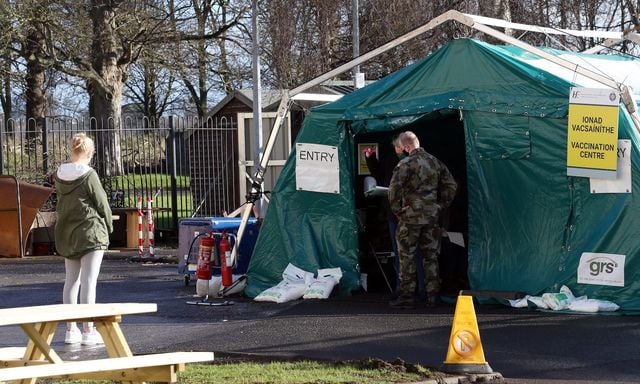 The Irish military taking charge of vaccinating frontline workers and and doctors. RollingNews

A leading Irish Times columnist has called on the Irish government to seek help and ask President Biden for vaccines for the Irish this Saint Patrick’s Day.

David McWilliams is one of Ireland’s most influential authors, columnists, and speechmakers. His appeal comes as it becomes apparent that the EU has completely failed to create a reliable supply chain and Ireland has been deeply affected.

Ireland has only given the two shots to 147,000 people to date and is just finishing vaccinating those over 85 as the priority.

As McWilliams points out, both  Austria and  Denmark, two other European Union countries, announced they would seek vaccines independently this week.

McWilliams believes Ireland should do the same and reach out to President Biden as the US has ramped up its vaccinations to over 2 million a day.

McWilliams writes: “This St Patrick’s Day, the Taoiseach should ask US president Joe Biden for help. What about asking him for four million vaccines? In a sign of solidarity with its oldest ally and the homeland of more than 30 million Irish-Americans, the US could exercise its ample soft-power and help a friend in need.”

“When (Taoiseach) Micheál Martin meets Joe Biden over Zoom on St Patrick’s Day – all green ties and virtual shamrocks – both men could show real leadership. Joe, as magnanimous leader of the free world, and Micheál, as leader of a small free-trading country, could do a deal to buy American vaccines, inoculate both countries entirely by early summer and open the place to American tourists by the 4th of July.”

“What other country has that much soft-power and, with one of our own in the Oval Office, what better time to test it?”

He says Ireland is suffering from “best boy syndrome'', afraid to challenge the slow rollout by the EU, in case their leaders in Brussels become upset with them.

McWilliams says it is already happening in other countries “This week, Denmark and Austria entered a “vaccine alliance” with Israel, undertaking to buy vaccines from there. Poland is in talks with the Chinese government to acquire the Sino vaccine. Hungary and Slovenia are already administering the Sputnik vaccine made in Russia.”

McWilliams says it is now or never. “Given Ireland’s special relationship with the US, we should approach the Americans on the symbolic day when we celebrate our shared heritage, to buy vaccines– so let’s solve the problem by looking elsewhere, as the Danes and others have,” he states