Five men and a woman were arrested on Saturday for breaching Ireland's Public Health Act. 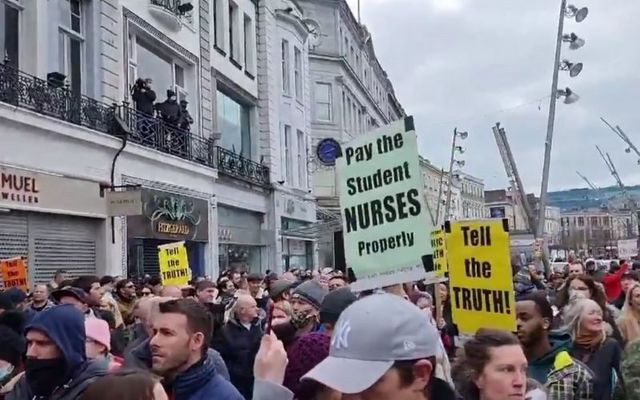 Six people were arrested in connection with an anti-lockdown protest in Cork on Saturday, which passed without incident.

Gardaí arrested five men and one woman in connection with the protest, arresting two men at the rally in Cork City for breaches of the Public Health Act and Public Order Act.

Gardaí also arrested one man in North Cork, one man in Kerry, and a man and a woman in Kildare for failing to comply with garda directions.

Officers believed that all four people were traveling to the protest in Cork City, breaching the Public Health Act by traveling more than 5km from their homes.

Saturday's protest in Cork attracted a crowd of between 400 and 500 people and passed without incident.

#corkprotest Many have gathered on Patrick Street to protest lockdown restrictions pic.twitter.com/IkNaBH3DJZ

Diarmaid Ó Cadhla, a spokesman from protest organizers the People's Convention, told the crowd that the rally was a peaceful and law-abiding protest.

He claimed that "countless" people had been turned away from the protest and said that everyone had a right to freedom of expression and freedom of assembly "without interference".

Ó Cadhla denied that he organized the event and refused to name the people who organized it.

"Number one, it's not relevant and number two it may lead to needless, petty-style persecution and that is to be avoided," he told RTÉ News.

Almost no protesters were wearing face coverings during the demonstration.

The rally concluded with a rendition of Our Father followed by the National Anthem.

Gardaí had put an extensive policing plan in place for the protest in the wake of the violent scenes during an anti-lockdown protest in Dublin last week.

Gardaí drafted in officers from the Cork North and Cork West divisions to boost police presence in the city during Saturday's protest.