Dublin faces its biggest challenge as anti-lockdown supporters in their thousands are arriving in Dublin many spouting QAnon conspiracies. 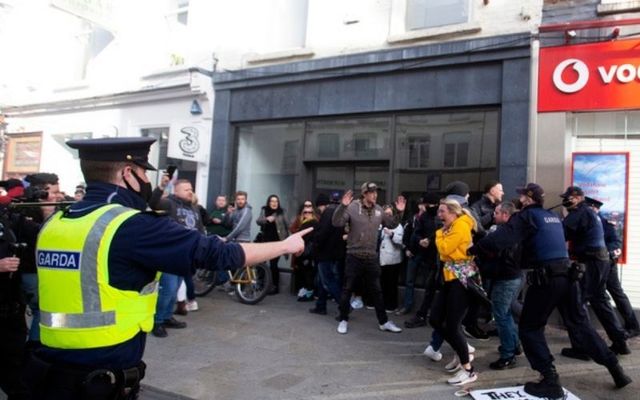 It seems rivalry has just begun but If folks thought QAnon conspiracies in America were bad, the Irish branch, which came out in force at a violent demonstration attended by thousands in Dublin on Saturday, is even more bizarre.

The accusations were so bad in fact that Irish Deputy Leader Leo Varadkar called them “bonkers” when he read their statements.

Referring to the comments he said, ‘That’s pretty bonkers, isn’t it? And not far off the kind of QAnon stuff that we’ve seen in America and other parts of the world,”

A demonstrator, Erica Parker, and her friend Susan told the Irish edition of The Sunday Times that 9,000 people went missing in Ireland last year and that ‘reptilians’ took them. Both wore jackets stating”  “Save our children from the reptilians”.

The reptilians they say are connected to RTÉ, Ireland’s state-run radio and television station,  “RTÉ sold there [sic] souls” and “Save our children from the reptilians” they told the newspaper.

Asked how this was linked to RTÉ, the Times reports that the two, who had many supporters. “outlined a conspiracy theory that involved babies being killed and harvested for “adrenochrome” which is used to keep RTÉ celebrities “looking young” while the corpses are buried under the new children’s hospital.”

The two also claimed the government was “basically paedophiles” and that a secret website revealed all.

Flyers were handed out claiming 5G causes COVID and the pandemic was a “plan” to depopulate the world and create a “high-tech totalitarian world”.

Another organizer, Shakti Ji, told the Times the violence at the event was carried out by “Antifa”. “

They were Antifa, paid by Soros . . . We walked away from that,” she said.

She said she was very pleased with how the event turned out, and she and the other organizers of RiseUp Eireann were planning a number of future events.

Social media and messaging apps were used to organize the protest.

In one recent Facebook video, she said she had been “inundated” with questions about the event.

“This is a social and cultural gathering . . . We are going to say no to this lockdown and to tyranny,” she posted. “We need to be solid, we need to be strong within our tribe, and we need to be peaceful.” She called on participants to “walk away” from confrontation.

A post to the RiseUp Eireann page afterward, however, celebrated it as a success. “Ireland rose up!” read the post. “The greatest awakening is here.”

The Telegram discussion linked to the group had 170 members yesterday, with hundreds of posts.