One member of An Garda Síochána was hospitalized after protesters hurled fireworks and other projectiles at gardaí near St. Stephen's Green in Dublin. 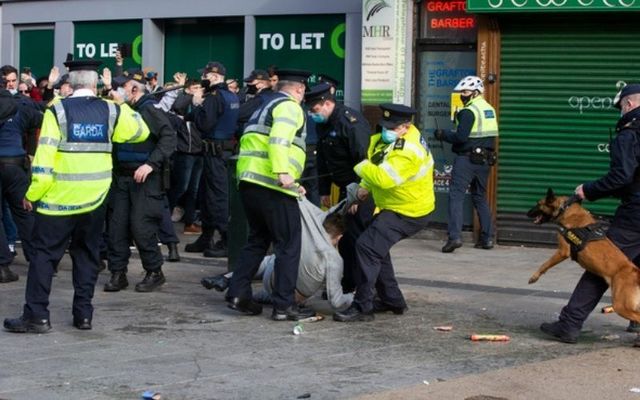 Three gardaí were injured during violent anti-lockdown protests in Dublin City on Saturday afternoon that resulted in 23 arrests.

One Garda was hospitalized in the violent clashes near St. Stephen's Green in Dublin City Center as demonstrators hurled fireworks and other projectiles at gardaí.

An Garda Síochána had prepared for a planned anti-lockdown protest on Saturday afternoon by closing St. Stephen's Green to members of the public and increasing Garda presence in Dublin City. However, Commissioner Drew Harris said that several people arrived "intent on violence".

"They engaged in attacks on members of An Garda Síochána including, as we can see on social media, the throwing of a firework-type device," Harris told RTÉ News.

Harris said that one demonstrator threw a firework-type device at a member of An Garda Síochána and that the officer narrowly avoided serious injury.

"It was only the member's quick thinking that saved him," Harris said.

The Garda Commissioner said that there will be a full investigation into Saturday's demonstration and said that more people would be investigated in the near future.

"There were some 23 arrests that we have made already and those arrests are continuing. This operation is not over as we pursue individuals who engage in protest and illegal activity today."

Meanwhile, Taoiseach Micheál Martin has condemned the "thuggish behavior" of protesters on Saturday afternoon and said that the demonstration was disrespectful to everyone working to curb the spread of COVID-19.

"The large gathering, in the face of ongoing Covid-19 restrictions, showed a complete lack of respect to the people who have made huge sacrifices during this pandemic," Martin said in a statement.

"Nor can we tolerate the thuggish behavior or attacks on gardai, who have the public’s utmost respect as they continue to protect and serve our society in difficult circumstances.

"There can be no justification for the march or the violence that unfolded, and I pay tribute to members of An Garda Siochana who moved quickly to make arrests and restore order."

Sinn Féin President Mary Lou McDonald also slammed the protests, labeling them a "slap in the face" to everyone who has done their part to stop the spread of the coronavirus.

"The protest in Dublin is reckless and is a slap in the face to the people of this city and beyond who have made huge sacrifices over the last year. Shocking and disgraceful scenes," McDonald said on Twitter.

The protest in Dublin is reckless and is a slap in the face to the people of this city and beyond who have made huge sacrifices over the last year. Shocking and disgraceful scenes. #graftonstreet