Protesters hurled fireworks and other projectiles at members of An Garda Síochána during a violent protest in Dublin on Saturday. 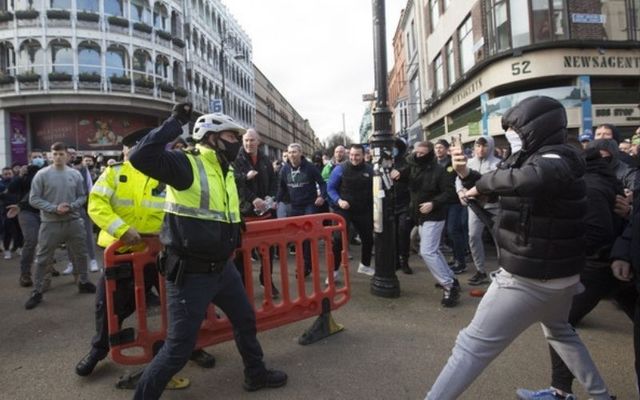 A protester clashes with a member of An Garda Síochána in Dublin City on Saturday. Rolling News

Gardaí were forced to close St. Stephen's Green off to the public before hundreds of anti-lockdown protesters descended on Dublin City on Saturday afternoon.

Members of An Garda Síochána prevented protesters from accessing the park in St. Stephen's Green after instructing the Office of Public Works (OPW) to close it.

Officers used batons to push protesters back, while demonstrators hurled fireworks, cans, and bollards at gardaí.

Gardaí are operating a policing plan Dublin city centre this afternoon. A number of traffic diversions and other policing plans are currently in place. Those who are conducting their essential journeys may meet obstructions on their journey and will need to avail of diversions.

A number of protesters have been arrested, while Luas operators Transdev have confirmed that the Green Line services will not be stopping at St. Stephen's Green this afternoon due to the protests.

Anti-lockdown activists had planned a protest for 2 p.m. in Dublin City on Saturday and had also attempted to orchestrate a "grand re-opening day" on Jan. 30 and Feb. 14 by encouraging businesses to defy the Irish Government's health restrictions and open their doors to the public.

The activists were unsuccessful in their efforts to orchestrate a re-opening, despite their attempts to swell support on various social media sites.

Protesters are pushed down Grafton Street after a firework is launched at Gardaí pic.twitter.com/X1DgLXjiKp