Highs and lows of the shamrockery of Irish in US this St. Patrick’s Day

From tax and immigration with Donald Trump to Mayor de Blasio's Gerry Adams misstep. It was quite a week for the Irish in Washington D.C and New York. 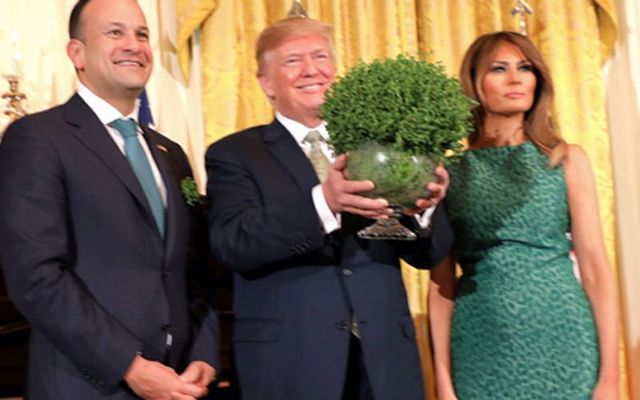 From tax and immigration with Donald Trump to Mayor de Blasio's Gerry Adams misstep. It was quite a week for the Irish in Washington D.C and New York.

The Paddy's Day shamrockery that goes with the taoiseach's visit to Washington every year is a bit of harmless fun.  Of course there's also a serious side to it because it gives the Irish unique access to the White House and a chance for the taoiseach to raise issues that are important for us directly with the president.

The status of the undocumented Irish and tax policy were two of the items that Taoiseach Leo Varadkar and President Donald Trump discussed this year, we are told.  But essentially the visit is about building a warm relationship in a relaxed, convivial atmosphere. In that context, there's always a good deal of paddywhackery, banter, leg pulling and jokes at the various receptions and dinners.  Some of our previous leaders were adept at this, Enda Kenny being a recent example. But it's not the current taoiseach's forte.

Varadkar is not entirely humorless, but he's more comfortable dealing with serious matters.  He's not good at spinning yarns and he's even worse at telling jokes.  So it should not be a surprise that his clumsy attempt at humor during a speech in Washington last week did not work, despite President Trump’s bemused expression. The yarn was about Trump's hotel and golf resort at Doonbeg on the beautiful Co. Clare coast and how it had been threatened a few years ago by a proposed wind farm nearby. The turbines would have been visible from the course. At the time, Varadkar was the minister for tourism.  He got a call from Trump who was understandably unhappy about the proposed wind farm after all he had spent on the resort. We don't know exactly what was said, but Varadkar seems to have agreed he would look into the matter.  There's nothing unusual about that since all politicians here, from local councilors to members of the Dail, make representations to government departments and state bodies on behalf of constituents on all kinds of issues from welfare payments to planning permissions.

Rightly or wrongly, it has become a feature of political life here as our politicians compete for votes.  It's supposed to keep the civil servants on their toes rather than influence their decisions.  In this case, rather than contact the council officials in Clare, Varadkar asked Bord Failte (the Irish Tourist Board) to look into it, and some time later board sent its observations to the local planners. Those observations were among around 20 objections to the proposed wind farm and planning permission was subsequently denied. And given the sensitivity of the area, that decision had wide local support.  The supposedly funny point in the story, as Varadkar told it last week, was that The Donald probably thought that Leo, like a Mafia don, had made a call and got the planning permission refused, when the reality was the decision had been taken independently by the local planners in the normal way.  This feeble attempt at a joke caused more puzzlement than laughter when Varadkar came out with it and was ignored by the American media. In Ireland, however, it set off a storm of criticism that ranged from accusations that the taoiseach had embarrassed us, to allegations that he had corrupted the planning process.

Much of the outrage came from Fianna Fail, which is hilarious given their record in subverting the planning process during the boom. The truth is that Varadkar had done nothing wrong, apart from inflicting a confusing, unfunny joke on his American audience.  What was far more interesting was what the president had to say at the same event, which was the annual Speaker’s lunch hosted on Capitol Hill. Trump was in joke-cracking mood as well, and his attempts at humor were funnier than Varadkar’s but also came with a sharper edge.

Turning to his new best buddy, the taoiseach, he said that "whenever there's a problem, you call, we'll solve it ... except for trade! They got their taxes so low!" he complained to the audience as he pulled a face.

The crowd laughed as he gestured at Varadkar and said "You're a tough one to compete with, with the taxes!"  It was simultaneously funny and threatening, which is often the way with Trump.  Even though he was joking, one had the feeling that it was quite revealing of what he really thinks about Ireland, its tax regime and the effect of that on jobs in America.  This may have reflected what was going on in private in the many meetings that took place last week in the run up to St. Patrick's Day. With Varadkar was a high level team of officials and business people, including the chief executives of IBEC (the Irish business organization), the IDA (the state body that brings foreign companies into Ireland) and Enterprise Ireland (the state body that grows local business).  This is the more serious side of the Paddy's Day shamrockery mentioned above. One of the meetings last week was with Commerce Secretary Wilbur Ross about the critical issue of digital tax. The EU is planning to introduce an interim tax on the turnover of digital companies in Europe (up to three percent has been mentioned, with details to be announced this Wednesday).

This could have a massive impact on the giants like Google and Facebook which have been reducing their tax to almost nothing by routing activity through Ireland. Disruption of this cozy arrangement, which supports tens of thousands of jobs in Ireland, is a worry for us, even if most people in Europe think the digital giants have been getting away with murder and we have been accessories to the crime.  Ireland is in the uncomfortable position where we are trying to hang on to what we have without upsetting the rest of Europe. The Organization for Economic Cooperation and Development (OECD) is working to agree some effective global way of extracting a fair amount of tax from the digital multinationals. But this is taking forever, which is why the EU wants to impose a turnover tax on digital revenues in Europe in the interim.  The U.S. opposes digital companies being singled out on tax, either by the EU or the OECD, and last week's Irish delegation was attempting to get the Americans to accept that change is inevitable and that it is better to work with the OECD on this and thereby limit the damage.

It's just another problem for Ireland, as we face up to the long-term effects here of Trump's America First policy, a possible international trade war and Brexit.  Our economy may be flying at the moment with the latest figures showing a growth rate of over seven percent in the past year (which is even faster than China!) Much of this is due to so-called leprechaun economics, involving multi-nationals in a few sectors routing turnover through Ireland for tax purposes.

But even if the real figure is half that it's still way ahead of the rest of Europe (or the U.S.) The trouble is that what makes us successful also makes us vulnerable to tax changes or a trade war. Two other Paddy's Day events caught the attention. One was Varadkar being joined on parade march in New York by his partner Matt Barrett. After the rows in recent years about having gay participation in the New York march it's not surprising that it made the news here.

Some of this was less than complimentary about Irish Americans and how long it has taken them to catch up. We're great at being holier than thou here. When no one comments on gay couples marching on St. Patrick's Day, either here or in the U.S., we'll know we've arrived at true equality. The other news item was the bizarre decision by the mayor of New York Bill de Blasio to name St. Patrick's Day this year as Gerry Adams Day. De Blasio's simplistic reading of recent Irish history cast Adams as an unblemished hero in a fight for freedom and subsequently a peacemaker.

The reality was gruesome in the extreme, with a terror campaign that would have outraged New Yorkers if it had happened in their city. And of course there would have been no need to make peace if Adams and his comrades had not instigated a war over the heads of the civil rights movement in the North in the first place.  In fairness to de Blasio, he is not the only one to be taken in by Sinn Fein's recent rewriting of what happened from 1970 onwards in the North. Even here, it's having a blurring effect.  However, it's one thing to tolerate Adams for political reasons, as the taoiseach did last week in the U.S., with one eye on a possible future coalition between Fine Gael and Sinn Fein. It's quite another to wipe the historical slate and hold Adams up as a figure to be so admired that New York has a Gerry Adams Day rather than a St. Patrick's Day. Even de Blasio should know better than that.