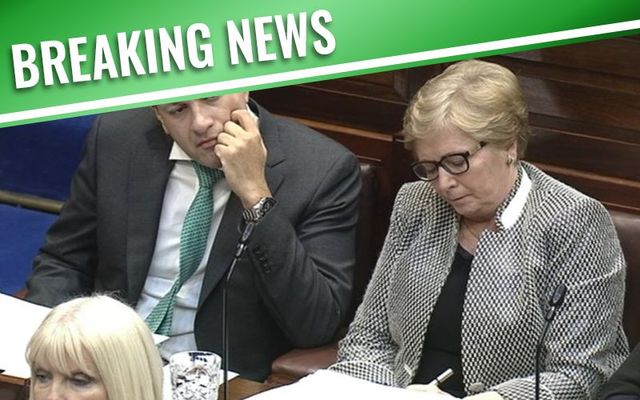 The Dept of Justice general secretary Noel Waters has also resigned. Waters was due to resign the position in February but is now to step aside immediately.

“I want to assure you that, in so far as is humanly possible, this Department has sought at all times to act appropriately, upholding the law and the institution of the State," Waters said in an official statement.

"Many of the claims about how the Department has acted that have been made in the media and in the Dáil are not true, and I am confident that the processes that the Taoiseach has announced will show that to be the case.”

"What the Tánaiste did was to decide we need to move on as a nation," he said on RTÉ's Six One.

"I respect the decision she took.

"Frances Fitzgerald told the truth, she gave all the information as she had."

“It is my strong view that a good woman is leaving office without getting a full and fair hearing," Taoiseach Leo Varadkar said in his official statement on the resignation of Tánaiste Frances Fitgerald, his deputy Prime Minister.

His official statement continued: "Frances has been an exemplary member of Government and a loyal colleague. She established the Department of Children and Tusla, changed the constitution twice to enshrine in it children’s rights and the right to marriage equality ...

“In the past few days a drip-drip of information may have made certain things seem greater than they are. There was a feeding frenzy, and it became impossible for her to get a fair hearing based on the full facts. I hope that will change in the period ahead.

“While all of the facts still remain unclear, there are a few things that we do know. Frances had no hand, act or part in the former [Garda] commissioner’s legal strategy, did not devise or guide it in any way. She was advised by her own officials that she had no function in the matter. The Attorney General has since confirmed this advice and further advised that she would have been acting improperly and inappropriately if she had sought to interfere with the work of the O’Higgins commission.

“We know from the emails, that Frances Fitzgerald had no knowledge of it until the commission’s hearing were already under way and that her knowledge of the detail was limited.

“I hope calm, measured reading of the evidence will show that the Tánaiste acted appropriately, and I hope the Charleton tribunal will establish this conclusively in the weeks ahead, and that she will have her good name vindicated. I expect her to continue to play a full role in political and public life including at the highest level."

Ireland’s Tánaiste (Deputy Prime) Minister has broken her silence after announcing her resignation on Tuesday morning.

She released the following statement:

“Today I made the decision to tender my resignation to the Taoiseach, stepping-down with immediate effect as Tánaiste and Minister for Business, Enterprise and Innovation.

“It has been the greatest honor of my life to serve in Government, but I believe it is necessary to take this decision to avoid an unwelcome and potentially destabilizing general election at this historically critical time.

“Throughout my career I have always sought to act with integrity and responsibility, and that is why I have decided on this occasion to put the national interest ahead of my own personal reputation.

“I would like to thank the Taoiseach for showing the same courage and determination to protect my good name that he displayed three years ago when he stood-up and defended the reputation of Maurice McCabe.

“What I admire most about the Taoiseach is that he has always believed in doing what was right – not what was popular or politically expedient.

“I will always be grateful for his confidence and support and for giving me the opportunity to serve in a Government that is making a real difference in people’s lives at a critical time in our history.”

She added: “However, I decided that my continuation in office risks destabilizing that good work, and so I have decided to step-down so that this work may continue, and the country can be spared an unnecessary election.

“It will also allow me to vindicate my good name at the Charleton Tribunal, without causing any further distraction to the work of the Government.

Statement by Frances Fitzgerald on her Resignation as Tanaiste and Minister pic.twitter.com/naZsyjZfiW

To understand more on the scandal, this timeline looks at how what a Garda whistle-blower said and did in 2006 has led to Fitzgerald's resignation.

Ireland’s Tánaiste (Deputy Prime) Minister announced that she was resigning on her own terms in the hopes of preventing Ireland from being plunged into a snap election before Christmas.

She announced her resignation after a Cabinet meeting at 11.15am (GMT). Fitzgerald told her Cabinet colleagues the decision was of her “own volition.” Those present said she showed little emotion.

She said that she was not asked to hand in her resignation and cited Brexit and other challenges facing Ireland as reasons for her decision.

Taoiseach (Prime Minister) Leo Varadkar told the meeting he accepted her resignation but does not believe it was the “right thing.” He said all issues raised over the Ministry for Justice, over the past week, are being dealt with by the Charleton Tribunal.

One cabinet member present told the Irish Independent, “There’s no doubt that she believes she will be proven innocent after the Charleton Tribunal does its work.”

The Dáil (Irish Parliament) will sit again at 2pm (GMT) when Fitzgerald will have an opportunity to make a statement.

Ireland’s Tánaiste (Deputy Prime Minister) Frances Fitzgerald told her Cabinet colleagues on Tuesday morning that she will step down from her position following a week of political discussion surrounding her knowledge of an aggressive legal strategy against Garda (police) whistleblower Maurice McCabe.

Fitzgerald’s resignation, it is hoped, will help in avoiding a snap, Christmas time, general election.

Breaking: 1) Taoiseach has rung FF leader to inform him of Tanaiste's resignation
2) Speculation mounting that @simoncoveney will be named as new Tanaiste #iestaff

Before the news was announced RTE reported that while “there has been no official confirmation” it is being “widely reported” by Irish politician that Fitzgerald will step down as deputy leader by the end of meetings, at 8pm on Tuesday.

Before entering the cabinet meeting on Tuesday Independent Alliance Minister for Transport Shane Ross described the situation as "very grave". Minister Kevin Moran also said the Alliance was against holding a general election.

Fianna Fáil's communications spokesman Timmy Dooley told RTÉ News that the Tánaiste needs to step aside or step down and if she did not then the Taoiseach (Prime Minister) Leo Varadkar needed to intervene.

On Monday night the situation escalated after the publication of correspondence from the Department of Justice.