How the Irish take over the White House every St. Patrick's Day

What began as a simple gift from the ambassador to the US President has become the most important tradition in Irish America. 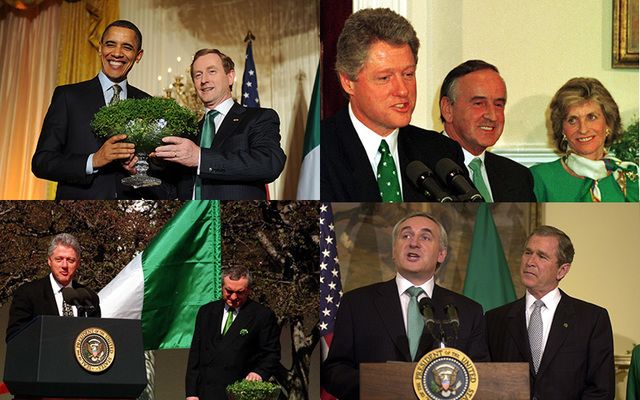 The influence of the Irish in America has waxed and waned over the centuries but it is safe to say it has never been more successful than in modern times. Some would say a major contributing factor is the annual day-long celebration in the White House and on Capitol Hill of St. Patrick's feast day.

There is no other country in the world which has its own designated day to make inroads into the corridors of power in America. Every president since Harry Truman has taken part in the Irish celebration and it reached its zenith in 1994 when President Clinton threw open the White House on St. Patrick's night to hundreds of Irish American community leaders.

In the following years, the Irish White House day was a serious opportunity for leaders of all political parties in Northern Ireland to get together far from their home base where such contacts would be frowned on.

There have been the other great occasions, too: John F. Kennedy's acceptance of his family history and crest, Ronald Reagan's funny as hell one-liners, and Barack Obama talking about how he discovered his own Irish roots.

What started in 1952 with Ambassador John Hearne sending President Truman a gift of shamrocks leading to an invite for President Seán T. O’Kelly to visit the White House in 1959, has since evolved into an Irish extravaganza and has at various points in time been used to announce important events such as efforts to find peace in Northern Ireland and the appointment of new ambassadors.

How will it be with President Trump? We know the day is set aside and that the event will definitely take place, never a given when there is a new president in power. On Thursday, March 16, Taoiseach Enda Kenny will be hosted by Trump in the White House before making his way to New York for the day itself and it has been promised the President will carry out the “full Irish” list of engagements.

We must wait and see but in the meantime, study this video for enchanting moments that recall the unique relationship between two great countries:

What are your thoughts on the annual White House Shamrock ceremony? Is it important or do we make too much of a fuss? Let you know in the comments section.