French and Irish leaders call for UK to begin EU exit process “as soon as possible.” 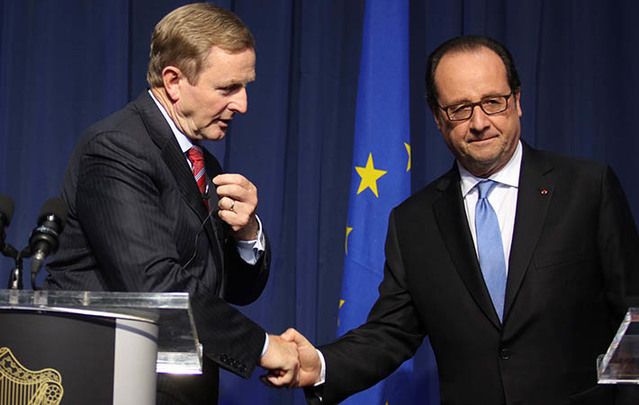 The Taoiseach (Ireland’s Prime Minister) reiterated the sympathy and solidarity of the Irish people with France in the wake of the horrendous attack in Nice, July 14. President Hollande briefed the Taoiseach on the current security situation and on the French Government’s response.

Read more: Irishman recalls the horror of Nice as killer mowed down everyone

The two leaders agreed on the urgent need to accelerate ongoing work on a range of EU counter-terrorism and security actions, and to promote the closest and most effective cooperation between police and security services. They also agreed that the surest way of asserting and protecting Europe’s fundamental values is to refuse to bow to terrorism and its assault on those values.

The two leaders released a statement on Thursday saying they wish to see the UK begin the process of leaving the EU “as soon as possible.” Their statement said they “looked forward to the notification as soon as possible by the new British government of the UK's intention to withdraw from the Union, which will permit orderly negotiations to begin."

Hollande and Kenny agreed that it as vital to maintain a close relationship between the EU and the UK. The statement continued “Ireland and France are the UK's nearest neighbors, with significant and complex economic, human, cultural and historical links. In consequence, both countries have specific and indeed unique concerns to be addressed in future negotiations.”

Hollande commented on the fact that the UK can’t access the EU market without free movement. Speaking at a press conference at the Government Buildings he said that the sooner negotiations began the better and added the “shorter the better.”

He also said he was very aware of the fact that Brexit will have consequences for Ireland, particularly due to the shared border. He said he had discussed those concerns with Kenny.

On Thursday evening Hollande will meet the new British Prime Minister Theresa May in Paris. He told the press in Dublin that he will ask her for an explanation regarding the delays to times of the country’s exit from the EU. A spokesperson for May has said Britain was unlikely to trigger Article 50 until the end of 2016. The French leader, Hollande, also said he would soon hold talks with German Chancellor Angela Merkel.

Theresa May will today travel to the Élysée Palace to meet with President Hollande for Brexit discussions. pic.twitter.com/7WybwOw94G

Hollande had been forced to curtail his tour of European capitals due to the terror attack, which killed 84, in Nice, on July 14, Bastille Day. Kenny reiterated the sympathy and the solidarity of the Irish people with France.

The President briefed the Irish leader on the security situation following the attack and both men agreed “on the urgent need to accelerate ongoing work on a range of EU counter-terrorism and security actions."

Following the attacks in Paris in November 2015, also carried out by members of the so called Islamic State, which killed 130 people, the Irish leader had said it would stand in solidarity with France. Hollande said he would not forget this.

The consequences of the UK referendum on its membership of the European Union was the other dominant focus of the discussions. The President and the Taoiseach reiterated their commitment to the principles set out by the twenty-seven Heads of State or Government on 29 June. In particular, they looked forward to the notification as soon as possible by the new British Government of the UK’s intention to withdraw from the Union, which will permit orderly negotiations to begin.

They reaffirmed their shared commitment to the European Union as the essential framework for Europe’s peace, prosperity and security. They also agreed, however, that it is essential to renew the confidence of citizens in the European project.

The leaders also exchanged views on the economic situation, noting the progress made in both countries and in the euro area generally, but also the risks ahead, including as a result of the UK referendum. They also discussed the implementation of the COP21 Agreement, and the future work needed to honor the EU’s climate change and energy commitments.

Here’s a video of the leaders press conference:

Hollande also traveled to the Áras an Uachtaráin (the president’s residence), to meet with President Michael D Higgins and his wife Sabina.