Hillary Clinton to be inaugurated as Queen's University Chancellor Friday 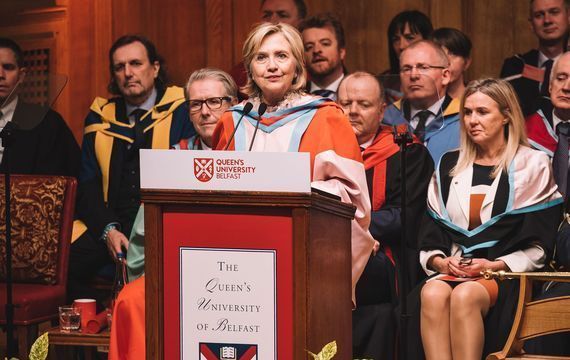 Hillary Clinton will be inaugurated as the Chancellor of Queen's University Belfast on Friday when she will become the first female Chancellor in the university's history.

The formal inauguration ceremony is set to take place at Whitla Hall at the end of the first week of the academic year. The BBC reports that Clinton will deliver an address and confer several honorary degrees as part of the event.

Clinton's role as Chancellor will be largely ceremonial and is slated to run for a period of five years.

The 2016 Democratic nominee will preside over graduation ceremonies, serve as an ambassador for the university, and offer advice and counsel to senior management at the university as part of her duties as Chancellor.

Clinton said that she was proud to be named Chancellor of the university when she was appointed to the role in January 2020.

"It’s my great privilege to become @QUBelfast‘s 11th — and first female — chancellor," she said in a tweet at the time. "It’s a place I have great fondness for and have grown a strong relationship with over the years, and I’m proud to be an ambassador for its excellence."

Clinton was awarded an honorary Doctor of Laws degree by the university in October 2018 and also established the "Hillary Rodham Clinton Award for Peace and Reconciliation", which awards a scholarship to an "exceptional female student from the USA who wishes to pursue study in a field related to politics, conflict transformation or human rights".

Clinton first visited Northern Ireland in 1995 alongside her husband, former President Bill Clinton in November 1995. The historic visit proved monumental in the Northern Ireland peace process and helped lead to the signing of the Good Friday Agreement in 1998.