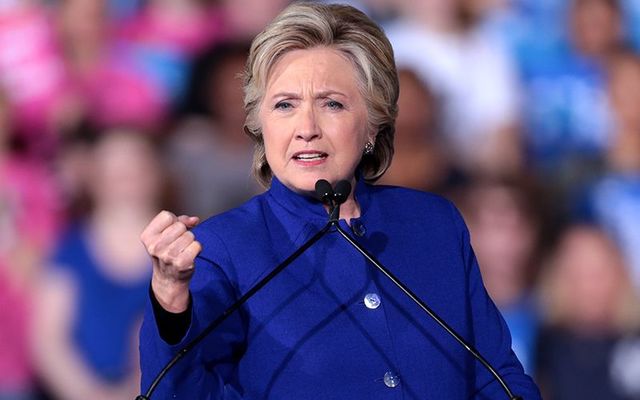 Former US presidential candidate and Secretary of State Hillary Clinton spoke at Trinity College about how the world is at “a global tipping point” and that “facts and reason are under assault like never before.”

Clinton, while giving a lecture at Trinity, believed that this is a time in which people will determine whether to embrace “free people, human rights and democracy” or “retreat to closed societies, oppression and authoritarianism.”

"Facts and reason under assault like never before" - Hillary Clinton at Trinity College Dublin lecture pic.twitter.com/5fTtLHhN8U

The former first lady received an honorary doctorate in law for her contribution to society this afternoon, with others joining her such as US philanthropist, Dr. James Simons; Archivist at the Irish Architectural Archive, Ann Rowan; and the co-founder of the Young Scientist Exhibition, Dr. Tony Scott.

Professor Anna Chahoud, the Public Orator speaking in her honor stated: “Almost sixty-six million people have given her their vote of confidence, sharing her belief that a true democracy is a society in which everyone is equally valued as a human being, from infancy to old age, irrespective of gender, status or nationality; it is a society in which women have the power to effect a transformative change towards development, justice, and peace.”

Clinton is known to have been involved with the Northern Ireland peace process along with her husband, Bill, and has devoted much of her life to being a public servant through advocacy and various roles in government.

She believed that the 1998 Good Friday Agreement set an example for the world for what was possible when reconciliation occurred and people came together to work toward achieving and maintaining peace.

Amid the U.K. leaving the EU, she noted that any decisions taken in the exit should not undermine peace in the region.

“No matter the outcome of these discussions, Brexit should not be allowed to undermine the peace that people voted, fought and even died for,” Clinton expressed.

Her main focus, though, was on the current political climate, emphasizing that millennials, were “proving to be some of the most effective activists.”

However, she described the current feeling held by young people in the U.S. who are “discouraged by the policies of the Trump administration” and are “disgusted with politics and disenchanted with our democratic system.”

According to Clinton, the current administration was making matters worse since they are “set on waging war on the rule of law.”

In regards to the immigration controversy that the administration has been facing, Clinton felt that many Americans were heartbroken “as immigrant families were ripped apart and immigrant children were treated cruelly as political pawns.”

Clinton acknowledged that with the public outcry over U.S. President Trump’s immigration policy separating immigrant children from their parents, the administration was “finally forced to take a step to end family separation.”

Despite this step by Trump, the fight, she said, was far from over because many of these families have yet to be reunited with their detained children.

Yesterday, as part of her trip to Ireland, Clinton met with Irish Taoiseach Leo Varadkar in Dublin to discuss gender equality and had met with the European Commission President Jean-Claude Juncker and the EU’s chief negotiator Michel Barnier as well.