General Mark Milley, currently at the center of a revelation in the upcoming book "Peril," has previously noted the support of his "close-knit, small Irish" community. 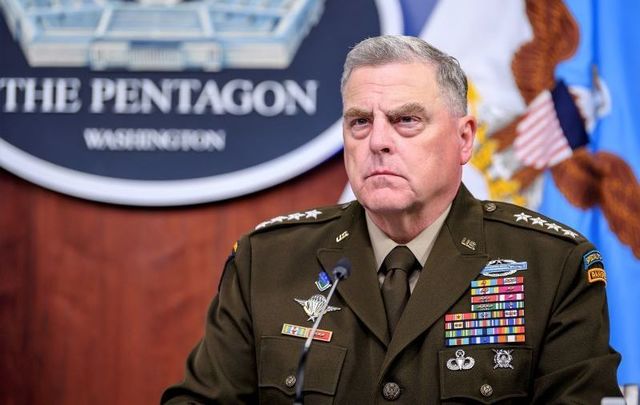 May 27, 2021: Chairman of the Joint Chiefs of Staff Army Gen. Mark A. Milley testifies before the House Appropriations Committee-Defense on the Fiscal 2022 Department of Defense Budget in the Pentagon Press Briefing Room, Washington, D.C. Flickr / U.S. Secretary of Defense, CC BY 2.0

General Mark Milley, the Chairman of the Joint Chiefs of Staff, has been at the center of an extraordinary revelation about making sure Donald Trump did not launch a nuclear attack in the new book "Peril" from journalists Bob Woodward and Robert Costa.

According to "Peril," which will be released next week, Milley was so worried about Trump’s mental condition in the final months of his administration that he twice phoned officials in China to offer reassurances, and even reiterated to his immediate staff the strict procedures surrounding launching a nuclear attack.

Milley, who was appointed as the Chairmen of the Joint Chiefs of Staff in October 2019 under President Trump and remains in the role under President Biden, has a Boston Irish background through and through.

"My heart’s always in Boston,” Milley told the Boston Globe after being appointed Army chief of staff in 2015.

Pointing to his upbringing in Winchester, Massachusetts, Milley said at the time that he felt the support of “a very patriotic, close-knit, small Irish and Italian community.”

Milley has carried that support with him through his illustrious career in the US Army for which he has received several awards, including four Bronze Star Medals.

As it happens, Milley has the support of another Irish American in the wake of the revelations in the forthcoming "Peril" - that of President Biden.

"I have great confidence in General Milley," Biden told a reporter who asked if he believed Milley "did the right thing" after the revelations were published this week.

Reporter: "Did General Milley do the right thing, sir?"

President Biden: "I have great confidence in General Milley." pic.twitter.com/unEzAYXIJl

The Irish name Milley was originally written in a Gaelic form as O Maolmhuaidh, which is derived from the word "muadh," which has the dual meaning of "noble" and "big and soft."

There is nothing soft about Milley however, as recent events have shown. His duty, as he always said, was to the Constitution, not to any particular president. He may well have stopped something very bad from happening by his actions.