Families of the 11 victims of the County Fermanagh bombing continue to fight for justice 33 years on. 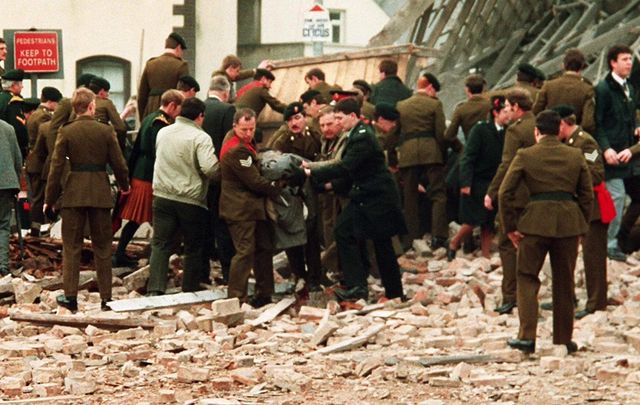 Members of the pubic and military deal with the aftermath of the 1987 Enniskillen, Remembrance Day, bombing which killed 11. BBC / YouTube

Relatives of those who died in the Remembrance Sunday bombing in Enniskillen, one of Northern Ireland’s worst tragedies, have called on the Irish and British governments to bring the killers to justice on the 33rd anniversary of the victims’ deaths.

Micheal Martin, the first Fianna Fail  Taoiseach to attend a Remembrance Day commemoration in Enniskillen, was at last Sunday’s anniversary service when the call was made to capture and prosecute the 1987 IRA bombers whose outrage killed 12 and injured 64.

Among the 11 who died on the day of the bomb was nurse Marie Wilson, whose draper father Gordon Wilson, born across the border in Manorhamilton, Co. Leitrim, became a peace campaigner before his own death in 1995.

The 12th person to die in the attack lay in a permanent coma before passing away 13 years later.

Stephen Gault, who called for justice after 33 years, lost his father Samuel in the Remembrance Day service to remember the dead of the first and second world wars.

The Irish Times reported that Gault, who was at last Sunday’s commemoration, said, “I would like to see both governments come together and find out who actually perpetrated this heinous crime 33 years on.

“The people who carried out this crime, if they’re still alive, are walking free, whereas the families have been locked in a prison sentence for 33 years.”

Margaret Veitch, whose mother and father Agnes and William Mullan were among the bomb victims, said, “The hurt never goes away, the pain never goes away, and I just think that after 33 years Enniskillen has been totally forgotten. We’ve had no justice, nothing.”

Martin said it was an “honor” to be present as taoiseach and that it was very important to “share and remember” all those who died in past wars, as well as those killed in the Enniskillen bombing.

Martin said the spirit of the ceremony was similar to that of the shared-island unit in his department, and he had discussed this with the Church of Ireland dean of the diocese of Clogher, the Very Rev Kenneth Hall, and with the parish priest in Enniskillen, Monsignor Peter O’Reilly.

“The shared island is about different traditions coming together and knitting together more strongly, as has been said during the ceremony,” Martin said.

Here's a video, posted two years ago by the Daily Mail, on the events in Enniskillen in 1987: