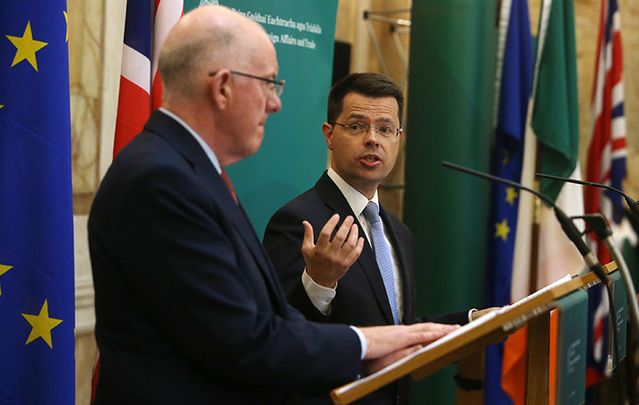 Britain and Ireland are on the cusp of a new deal to allow immigration controls to take place at ports of entry in Ireland and leave Northern Ireland without new hard borders.

Following the 'Brexit' vote, which will see in Britain leave the European Union by 2019 while Ireland remains, there were grave fears that new border posts and customs areas would be reintroduced along the Irish border.

The Northern Ireland secretary, James Brokenshire, told the Guardian that London and Dublin will work with a “high level of collaboration on a joint program of work” between the two states to control immigration.

“We have put in place a range of measures to further combat illegal migration working closely with the Irish government,” Brokenshire said. “Our focus is to strengthen the external border of the common travel area [CTA], building on the strong collaboration with our Irish partners.”

(The CTA is a unique arrangement that allows for full freedom of movement of people between Ireland and Britain.)

Under the proposed new rules, Irish entry points such as Dublin and Shannon airports and Rosslare port would become immigration inspection points. Customs would also be handled.

Brokenshire said: “We are already working closely with the Irish government and other members of the common travel area to prevent people from seeking to evade UK immigration controls from entering via another part of the CTA. There is a high level of collaboration on a joint program of work. This includes investment in border procedures; increased data sharing to inform immigration and border security decisions; passenger data systems enabling the collection and processing of advance passenger information; and harmonized visa processes.”

Ireland’s foreign minister, Charles Flanagan, said he welcomed the new efforts to avoid a hard border with Northern Ireland. “In terms of the threat of illegal immigration through the border, the sharing of information is vital, as is the sharing of systems and the use of digital technology. These are means by which we can ensure that any adverse impact is minimized. The object of our engagement is to maintain the common travel area.

“I caution that this will be a decision not just by the UK or Irish governments but ultimately also by the 27 EU states”.

Read more: Is English arrogance about to end the United Kingdom?

Brokenshire stated the new arrangements, if agreed, would mean no disruption of the peace process. “Political stability and prosperity in Northern Ireland has been hard fought over many decades, and we will not do anything to undermine it,” he said. “There is no reason to think that the outcome of the referendum will do anything to undermine the rock-solid commitment of the UK government and the people of Northern Ireland to the settlement set out in the Belfast Agreement and its successors.”

“The open border for people and businesses has served us well and no one wants to see a return to the borders of the past. It is a high priority for the government that we do not see border controls coming into place. There is a very strong commitment from the Irish government as well as ourselves to see that that does not happen.”