Details emerge of Irish medical trials on a drug therapy that could benefit those with severe COVID-19 infections as Ireland's economy opens up. 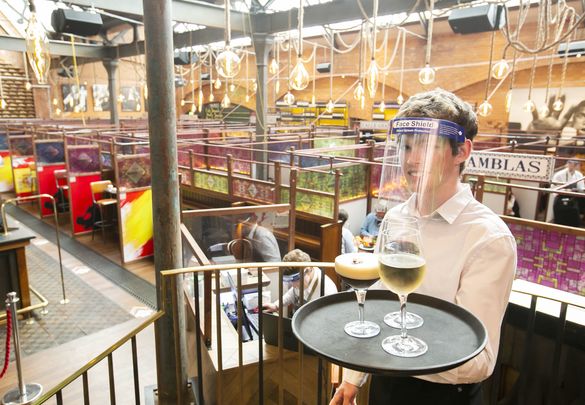 The Market Bar, on Fade Street, opening up in Phase 3 of COVID-19. RollingNews

As Ireland initiates clinical trials on a drug therapy that could help with COVID infections the Irish economy opens up, a little, once again.

Irish medical researchers have initiated a clinical trial for a promising drug therapy that could benefit those with severe COVID-19 infections.

Details have emerged as Ireland this week extends its economic comeback, along with warnings from medical chiefs to continue refraining from traveling abroad. The U.S. is not expected to make an EU list of safe countries.

A team from the Royal College of Surgeons in Ireland and Dublin’s Beaumont Hospital are studying a protein produced in the body, alpha-1 antitrypsin, which normally acts to protect the lungs from the destructive actions of common illnesses.

The team headed by professors Gerry McElvaney and Ger Curley has already published a paper in the American Journal of Respiratory and Critical Care Medicine describing the use of the science behind alpha-1 antitrypsin.

Their study believes it is a vital therapy in the treatment of critically ill COVID-19 patients who are being mechanically ventilated in intensive care units.

Irish technology news site the Silicon Republic reports a statement from Curley:  “We are confident that this clinical trial will demonstrate the potential for alpha-1 to improve the outcomes for patients with the most severe COVID-19-induced respiratory difficulties.”

The Irish Times has described the venture as the first “investigational medicine product trial to be approved in Ireland to test a therapy to treat Covid-19”.

Investigation co-head McElvaney said a greater understanding of how the body’s inflammatory mechanisms are impacted by Covid-19 could open the door to several potential therapies including antiviral medications and “targeted immune-modulators” such as alpha-1-antitrypsin.

Meanwhile, as stage three of Ireland’s road to recovery started on Monday, with the opening of pubs that serve meals, restaurants, hairdressers, and churches with maximum attendances of 50 – for now – medical chiefs advised against holidays abroad.

Thousands of people who have booked overseas holidays are being advised to cancel them amid fears Ireland could be seeing the first signs of a potential resurgence of COVID-19.

Chief medical officer Dr. Tony Holohan issued the plea amid a small but worrying rise in clusters of travel-related infections and an increase in cases of the virus in young people flouting rules in Ireland.

Airlines resume flights this month and the government within days is expected to announce a list of “air bridges” to countries with a similar low infection rate as Ireland in which passengers won’t have to undergo a 14-day quarantine period.  The air bridges will be based on a European Union safe list that is reported not to include the U.S., Russia, and Brazil.

Holohan said that the idea of increased air travel makes him “beyond nervous.”

New Transport Minister Eamon Ryan encouraged people to restrict “travel to when it is absolutely necessary” and urged “staycations” in Ireland this summer rather than travel abroad.

Travel on the roads within Ireland was extended for the first time since mid-March to the whole country, paving the way for first hugs in nearly four months between grandparents and their grandchildren.

Despite the initial hugs, families were reminded to continue to maintain their social distance, and face masks on public transport are now mandatory. Laws penalizing the absence of masks on buses and trains is due within days.

In newly re-opened hairdressers and barbers, some shops had their first customers at one minute past Sunday’s midnight.

In the pubs, customers had to order a meal of at least €9 with their drink and could only stay for 105 minutes to make room for other customers under the social-distancing arrangements.

Hugh Hourican in Dublin’s Boar’s Head looked at his packed bookings list and told The Irish Times, “If I was this busy normally on a Monday, I’d be delighted.”

Read more: Ultimate getaway? Buy yourself an island off Ireland