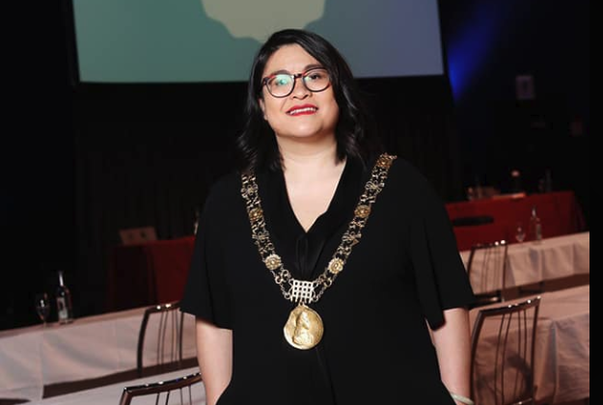 Green Party councillor Hazel Chu is the ninth woman and first person of color to take on the role of Lord Mayor of Dublin city.

Green Party councillor Hazel Chu has been elected the Lord Mayor of Dublin city, with the backing of the Dublin Agreement parties, including Fianna Fáil, Labour, Social Democrats as well as the Greens. She also received support from Sinn Féin councillors, getting a total of 43 votes, with only nine against.

Green Party councillor Michael Pidgeon, who proposed Chu for election, pointed out that Hazel Chu was only the ninth woman and first person of colour to become Lord Mayor.

Speaking to the council following her election Chu said "I am overwhelmed and humbled.

Chu pledged to right for housing and the homeless in Dublin. She said tackling the housing and homeless crisis which has seemed like "filling a hole in a sinking ship".

She also said she would tackle discrimination saying it wasn't enough "not to be racist, we have to be anti-racist”.

She will also promote discussions around race and gender during her time in office. She also wants to make Dublin a livable city.

Dear Dublin,
Thank you for being my birthplace, my home & what I represent. Thank you for having some amazing citizens, councillors & officials that bestowed a girl from Firhouse such a massive honour.
Big love,
Lord Mayor, Lady Mayoress & Mini Mayor aka Hazel @Costellop & Alex pic.twitter.com/u135CPF39g

Chu was the first Green Party councillor to be elected in during the May 2019 local elections for the ward of Pembroke. She topped the poll with over 4,000 first preference votes.

During her acceptance speech, Chu wondered if her mother, who had worked washing dishes in a restaurant off O'Connell Street, had ever dreamed that her daughter would become Lord Mayor of Dublin.

Chu's parents emigrated from Hong Kong, in the 1970s.

She studied politics and history in UCD and trained to be a barrister at Kings Inns. While studying she worked as a fundraising consultant for non-profits and as a production manager for music festivals.

After being called to the Bar in 2007, she worked in Sydney, Hong Kong and Guilin. Upon returning home she was offered a Fellowship by UCD Smurfit and worked in New York for Bord Bia. She has worked in various management roles and in 2013 became Diageo’s Head of Brand, Corporate and Trade Communications.

The new Lord Mayor was born and raised in Dublin, in the south suburb of Firhouse, before moving to Cellbridge. She now lives in Ranelagh with her Partner and two-year-old daughter Alex.